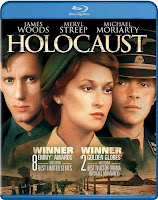 When this eight-hour miniseries premiered on NBC in 1978, it was a controversial event: could a sanitized reenactment show viewers the true horror of the holocaust? Well, it can, to an extent. Even though director Marvin J. Chomsky and writer/producer Gerald Green work within their era’s constraints, there’s still a powerful shock running through this melodrama about the travails of the Jewish Weiss family during Hitler’s murderous reign.

Helped by a top-notch cast—Fritz Weaver, Rosemary Harris, James Woods, Tovah Feldshuh and Meryl Streep as the Weisses and David Warner and Michael Moriarty as Nazis—Chomsky and Green bring out the immediacy and offhanded cruelty of those horrifying dozen years. The hi-def image looks impressive, even if the standard TV aspect ratio has been “converted” to widescreen. 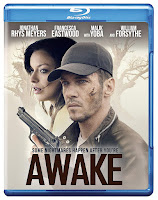 When a car accident victim awakens in a hospital room without his memory, he finds himself accused of being a serial killer—so he kidnaps a sympathetic nurse and goes off on a journey to clear himself and discover his true identity.

Jonathan Rhys-Meyers tries to invest this convoluted tale with gravity but isn’t able to transcend its utter familiarity; directors Alex Cher and Fedor Lyass (also the cinematographer) have made a stylish but empty drama. The film does look exceptionally good on Blu. 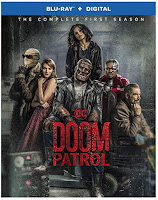 In this bizarrely entertaining superhero origin story, a quartet of freaks and outcasts who have been transformed into a kind of “misfit toys” society of superheroes—Crazy Mary, Cliff Steele, Mr. Nobody and Elasti-Woman—join forces to have one another’s backs and fight injustice and evil.

There’s a welcome sense of tongue-in-cheek glee along with a mix of parody and true belief in the genre that makes it diverting throughout. Whether the series can keep up such a pace past a single season is a big question: but right now it’s good, unclean fun. There’s a splendid hi-def transfer; extras include deleted scenes and a gag reel. 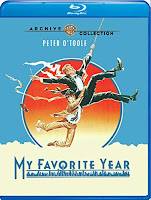 Peter O’Toole got a Best Actor Oscar nomination for his scenery-chewing performance in this mild 1982 comedy as a movie star and drunkard whose impending appearance on a 1950s comedy show (like Sid Caesar’s “Show of Shows”) causes consternation among the staff when it’s problematic whether he’ll be sober enough to appear on live TV.

Richard Benjamin’s routine direction takes much of the hilarity out of an already familiar tale, as pros like Joe Bologna, Lainie Kazan and Bill Macy and then-newcomers Mark Linn-Baker and Jessica Harper do what they can to back up O’Toole. The hi-def transfer looks good; Benjamin’s commentary is the lone extra.

A Touch of Class 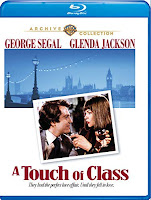 Melvin Frank’s romantic comedy about adultery was old-fashioned as soon as it was released in 1973; despite often groaningly obvious jokes and physical pratfalls, there’s an elegance and wit to the performances of the always underrated George Segal and Oscar-winning best actress (!) Glenda Jackson, which mitigates the movie’s essential shallowness.

That this also got a Best Picture and Best Screenplay nomination is surprising; equally surprising is that, though Jackson won, Segal was (as usual) shamefully ignored. There’s a clean, crisp hi-def transfer. 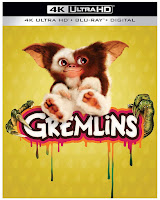 Joe Dante’s 1984 fantasy/monster spoof made a lot of money and made audiences happy, but it remains, 35 years later, an unnecessarily crude succession of parodies, many of which are so specific to its era that they now make little sense and provide few laughs.

Dante has some fun finding new ways to kill off both humans and the creatures, but after awhile, it starts to pall; even such good sports as Phoebe Cates, Zach Galligan and Harry Carey Jr. can’t save what’s an overlong mess of a movie. The UHD transfer is transfixing; a plethora of extras include commentaries, deleted scenes, featurettes and interviews. 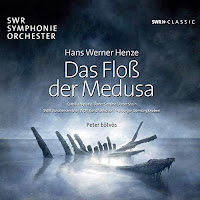 German composer Hans Werner Henze (1926-2012) often brought his leftist politics into his works, and his 1971 oratorio— titled after the classic 1819 painting by French artist Théodore Géricault and dedicated as a requiem for murdered Cuban revolutionary Che Guevera—is among his greatest meldings of the political and the musical. Henze set Medusa for a large orchestra, chorus, baritone and soprano soloists and a speaker, and Ernst Schnabel’s text vividly recounts the horrific events surrounding the few survivors of the shipwrecked French frigate, Medusa, in 1817: the crew was forced onto a makeshift raft and all but a handful of the 154 perished.

Henze’s score, alternating sorrow with anger, is given a dramatic reading by conductor Peter Eötvös, who impressively marshals the array of forces at his disposal: the SWR symphony orchestra, three choirs, soloists Camilla Nylund and Peter Schöne, and speaker Peter Stein