In Guillermo del Toro’s labored parable of Spanish rule under Franco, a young girl—who may be the reincarnation of an underworld princess—escapes into a fantasy world after her mother marries one of the dictator’s most reliable generals.

Del Toro does, as always, show a staggeringly imaginative visual sense (which the impressive photography and special effects contribute mightily to), but this two-hour fable becomes more enervating as it goes along, even wasting two splendid Spanish actresses: Maribel Verdu as the rebel housekeeper and Ariadna Gil, who suffers nobly as the girl’s mother. The new 4K transfer looks unsurprisingly sumptuous; extras include del Toro’s commentary and video prologue and hours of materials in featurettes. 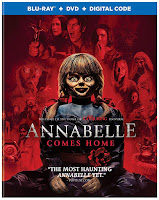 This strange little horror entry continues the tale of the possessed doll that, for some insane reason (to make this movie, I guess), the investigators who have her put it in their home’s heavily-fortified artifacts room. Of course, when they go away, leaving their young daughter with her teenage babysitter, the doll’s presence awakens the other evil spirits to create some havoc.

There are a few decent eerie moments—mainly early on—but the bulk of the movie musters little energy or originality. There’s a crisp hi-def transfer; extras are deleted scenes and behind-the-scenes featurettes. 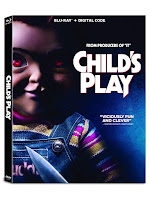 Here’s a reboot I don’t think anyone was pining for: Chuckie, the doll who programs itself to kill, returns in a brand spanking and shiny new box, and what the movie lacks in originality it partly makes up for in a few bizarrely executed murders, including an unfortunate man being scalped and skinned or others being killed in a mall melee.

Of the two new doll horror flicks (see above) movies, this is preferable—but not by much. The hi-def transfer looks fine; extras are featurettes and a making-of. 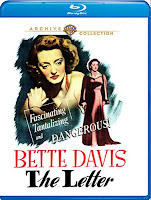 In William Wyler’s tense 1940 melodrama about adultery and murder, Bette Davis chews the scenery spectacularly in her Oscar-nominated portrayal of Leslie Crosbie, who fatally shoots her lover and tells her husband (and lawyer) it was in self-defense because he forced himself on her.

German director Jörg Buttgereit’s necrophiliac romances, from 1987 and 1991, are the very definition of cult films: made on a shoestring with glaring deficiencies in the filmmaking process, storyline and acting. But even though the infamously grotesque gore-filled sequences are nearly Ed Wood-level fake—the nasty and demented mind at work leads to a disgusting but perfect ending when our necrophiliac heroine decapitates her lover during sex and gets impregnated by a corpse.

Of course, most viewers’ mileage may vary: but if you’ve gotten this far, you’re admittedly intrigued. Even on Blu, the movies still retain their cheap look, but that’s to their ultimate benefit. The films are enclosed in a slipcase; extras include commentaries, music video and shorts, making-of featurettes and even a 2011 concert featuring the sequel’s star Monika M.

Writer-director Michael Winterbottom’s mediocre thriller about the kidnapping of a Pakistani bride-to-be by a British Muslim and their complicated relationship is one of this usually interesting filmmaker’s rare missteps.

Despite his premise, Winterbottom has made an action flick almost completely devoid of tension; instead, its travelogue ride through picturesque locales in Pakistan and India mitigate the convincing performances of Dev Patel and Radhika Apte as the kidnapper and his hostage. The film does look sharp on Blu.

Oliver Murray’s documentary about Bill Wyman, former Rolling Stone who surprisingly retired from the band in 1993, lets the famously reserved bassist narrate the details of his eventful life himself.

Although there are, somewhat disappointingly, no earth-shattering revelations or insights—even his romance of and short-lived marriage to Mandy Smith (whom he met when he was 47 and she 13) is dealt with quickly, waved away by Wyman’s comment that it was all about the heart, not mere lust—the liberal use of Wyman’s amazing collection of archival video and audio make this a worthwhile trip through Stones-related history. 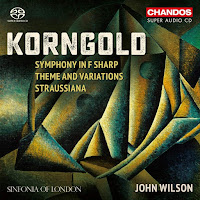 Erich Korngold was a composing and performing prodigy who became one of the 20th century’s most versatile composers, from operas and chamber music to indelible scores for Hollywood films. This new disc also shows that he was an originator of ravishing orchestral colors and brilliant arrangements: his Symphony in F Sharp is about as skillful a 45-minute orchestral workout as one can write.

Even the disc’s so-called filler—Theme and Variations and Straussiana, a tribute to the waltz master Johann Strauss—is done with endlessly bubbly wit. John Wilson conducts a razor-sharp account of these works by the Sinfonia of London.