Film and the Arts

Sebastian Junger Salutes the Life and Time of Tim Hetherington

Watching Which Way Is the Front Line from Here? The Life and Time of Tim Hetherington is safer than covering combat, but the new HBO documentary by author, journalist and filmmaker Sebastian Junger (The Perfect Storm) is not danger-free. It contains images of maimed bodies that may haunt you on a dark night.

But it also reminds you why you must miss the empathic British war photographer/filmmaker terribly. On April 20, 2011, scant

weeks after his and Junger’s chronicle of American soldiers in Afghanistan, Restrepo, was nominated for an Oscar, tall, lanky Hetherington was felled by mortar during the siege of Misrata, Libya. He was 40 years old.

Which Way highlights his award-winning ten-year career in such hotspots as Sierra Leone, Liberia and Afghanistan. None of this objective journalism stuff for Hetherington. He jumped right into the soup, asked personal questions, took stances and didn't hesitate to protect lives. Stills, footage and commentary give a glimpse into the singular choices he made both behind and beyond his lens. The film’s title comments on Hetherington’s artistic compass no less than on his war zone reporting.

At a preview screening presented by HBO and the Foreign Press Association, Junger reflected on his film and much-lamented friend. Hetherington plainly excelled at his craft, but it's just as clear that, given the choice between getting the shot or engaging humanity, he’d have happily walked away empty-handed, recalled Junger.

“The point wasn’t the photography; the point was what he was doing with this other human being, and as a result, he got great photos.” The medium wasn’t the message for Hetherington. “He used video; he used audio, exhibits in studios; I think he would’ve used crayons if he could’ve gotten

away with it to tell stories,” Junger mused.

FilmFestivalTraveler.com chimed in with a few questions.

Q: Your film has a lot of close-ups. How did Tim’s aesthetic and principle of human engagement influence your filmmaking and your aesthetic choices?

SJ: One thing I noticed with Tim in (Afganistan’s) Korangal Valley: we were each shooting video (for Restrepo) and had very different styles. You could always tell his footage because it very often starts in very close up; he grabs the focus and then he pulls out. What he was doing was sort of utilitarian, but it’s really quite lovely stylistically. It really gave me a taste for that. I hadn’t noticed (my close-ups in Which Way), but maybe unconsciously…

Q: How did you match music and image, and how did you avoid being maudlin?

SJ: You need a light touch. You don’t want to force people to have emotions because you’re covering them with music. You have to let people come to the music. I wanted something that was somber but not dispirited. Tim was a very joyful person. I wanted a few slightly Middle Eastern themes in there. Also there are moments where it’s more sounds than music. I wanted not quite sound design, not quite a thumping heartbeat, but something more atmospheric than a score.

When you think about director John Waters, the mastermind behind Pink Flamingos and Pecker, you think of fine dining and pleasant conversation, right? On June 28 and 29, 2013, the City Winery (155 Varick St, New York) will be hosting John Waters (One-Man Show).

No details have been released about the general theme for the show, but if it is anything like Waters' past talks and one-man-shows at various universities, it is certain to be witty, urbane, and utterly filthy.

And for those of you looking for something more intimate, the City Winery is also selling tickets for a special Meet-and-Greet Dinner with Waters. This is a great opportunity to enjoy some fine wine, quality dining, and to hear one of America’s greatest film makers discuss the quiet beauty of transvestites, pubic hair, and Baltimore trailer parks.

To learn more, go to http://www.citywinery.com/newyork

Encores! presents Fiorello!
January 30-February 3, 2013
New York City Center, 131 West 55th Street, New York, NY
Angelika Kirchschlager and Ian Bostridge
February 3, 2013
Alice Tully Hall, 65th Street and Broadway, New York, NY
When Encores! began in 1994, the first musical resuscitated was Jerry Bock and Sheldon Harnick’s Fiorello!, the immensely entertaining show about New York City’s legendary mayor Fiorello LaGuardia. Now, Encores! begins its 20th anniversary season with seven performances (through February 3) of that very same musical, starring Kate Baldwin, Shuler Hensley, Erin Dilly, Emily Skinner and, in the title role, Danny Rutigliano.
Between rehearsals, veteran Broadway performer Rutigliano recently discussed starring as Hizzoner in Fiorello! and how Encores! has changed over the past couple of decades.
Kevin Filipski: This is your fifth Encores! show. As a veteran, describe how different it is now from then: more performances and fancier stagings compared to concert versions with everyone flipping through their books.
Danny Rutigliano: I started back in the early days of Encores! I did One Touch of Venus with Melissa Errico, The New Moon directed by Fiorello! director Gary Griffin, Kismet with Brian Stokes Mitchell and Marin Mazzie, and Bells Are Ringing with Kelli O’Hara. It’s definitely gotten bigger each time. Back then it was so bare-boned: it was all about the music. So what we’re doing now is making it simple, not elaborate and exorbitant—it suggests the physical production but with fully staged blocking and musical numbers. It’s getting back to what we’re about—Encores! is a very unique treasure. Kismet was more elaborate—and in Bells, Kelli was so inspiring, she tackled the lead as if she’d been doing it 8 times a week for months. The bar has been set higher—the performances have a level of expectation.
KF: How does it feel bringing back this show?
DR: Fiorello! is a great show—it’s a Pulitzer Prize winner, let’s not forget that. The characters and the story are so rich: he was so fascinating, he was celebrated about being a great 3-term mayor, but the show ends when he is first elected. That’s how full his life and career were. The score is so terrific, it’s got many great tunes, so this is utter bliss for me, a role that I’ve wanted to play. It’s also timely about politics and how history repeats itself. And this is a terrific cast—Erin and Kate are fabulous. Encores! always puts together the best talent in town, it’s a little jewel that it isn’t so little—in the acting community everybody wants to do one of these shows.
When Angelika Kirchschlager and Ian Bostridge take the stage for their duo recital at Alice Tully Hall on Sunday, February 3, they will not be singing anything by such obvious candidates as Schubert or Schumann or Brahms, instead devoting their program exclusively to the exceptionally artful lieder of Austrian composer Hugo Wolf.
Specifically, the talented pair will perform 34 selections from Wolf’s voluminous and wide-ranging Spanisches leiderbuch (Spanish Songbook), with the stylish pianist Julius Drake accompanying them. Although he is considered one of the master songwriters (to my mind, he’s right up there with Gabriel Faure, with whom he shares the elegance and refinement that separate them from the pack), Wolf isn’t programmed as often as he should be.
Similarly, since the lovely Austrian mezzo and lanky British tenor don’t perform often enough in New York—Kirchschlager has especially been scarcely seen and heard on local stages, at least when compared to other top-flight female singers—this concert should be a must-attend for those who appreciate such musical artistry.
Encores! presents Fiorello!
http://nycitycenter.org
Angelika Kirchschlager and Ian Bostridge
http://lcgreatperformers.org

Back in the late ‘80s, when the Bangles had hit after hit, Susanna Hoffs was one of MTV’s poster girls: although all four members shared singing duties —Hoffs, sisters Vicki and Debi Peterson and Michael Steele—Hoffs’ sultry looks turned her into their defacto lead singer, especially on videos like “Manic Monday,” “Walk Like an Egyptian” (despite three lead singers), “In Your Room” and “Eternal Flame.”

After the Bangles first disbanded, Hoffs released two solo albums, the poppy When You’re a Boy (1991) and more introspective Susanna Hoffs (1996). Following a Bangles reunion that produced the energetic Doll Revolution (2003), Hoffs teamed up with Matthew Sweet for two cover records, Under the Covers, Volumes 1 & 2, on which, under their monicker Sid’n’Susie, they tackled ‘60s and ‘70s staples “Cinnamon Girl,” “Monday Monday,” “Maggie May” and “You’re So Vain.” 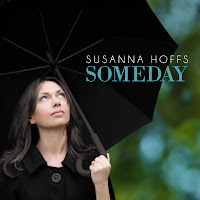 The past year has been a busy one for Hoffs. First, the Bangles reunited yet again for their first album in eight years, the folk-influenced Sweetheart of the Sun, released in September 2011. And this past summer, Hoffs released her first solo album in 16 years, Someday, a pure-pop gem (clocking in at a mere 33 minutes, like early Beatle records) heavily influenced by the mellow acoustic sounds of the ‘60s.
Hoffs played New York’s City Winery in 2009 with Matthew Sweet as Sid’n’Susie; the club’s intimacy should also nicely complement the songs on Someday.
Susanna Hoffs
November 5, 2012
City Winery, New York, NY
November 6, 2012
City Winery, Chicago, IL
http://citywinery.com