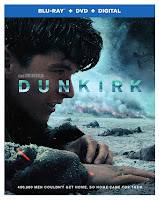 One of the most successful retreats in military history—the British got nearly all of their troops back safely to England, keeping Hitler at bay until the U.S entered the war in 1941—is not tailor-made for a film treatment the way director Christopher Nolan approaches it. Visually, Dunkirk is a marvel, but dramatizing how civilians took their boats into treacherous waters to pick up soldiers at Dunkirk by following one man and his sons who get involved with seemingly everything that happens at sea and in the air reduces the entire film to unrelieved, and implausible, melodrama.

No one—not even Kenneth Branagh and Mark Rylance—makes an impression, and the final impression is one of technical, not artistic, virtuosity. There’s a superlative hi-def transfer; a second disc of extras include nearly two hours of on-set featurettes. 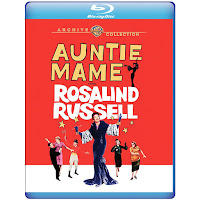 This 1958 adaptation of the stage play about an irrepressible aunt who goes to any lengths to protect her beloved nephew showcases Rosalind Russell’s unsubtle but indomitable performance in the title role.

However, 145 minutes of overwrought attempts at whimsy and charm are badly misdirected by Morton DaCosta, who never gets a handle on things, including blatantly racist characters like the Asian butler. The film has a ravishing hi-def transfer. 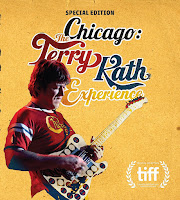 Michelle Kath Sinclair made this touching documentary portrait of her father’s legacy nearly 40 years after his death: Terry Kath was lead guitarist for Chicago, and he died when he put what he thought was an unloaded gun to his head and pulled the trigger a week before his 32nd birthday in 1978.

Kath has since gotten his due as one of rock’s most underrated guitar players, as we find out through encomiums by Joe Walsh, Steve Lukather and Mike Campbell, along with his fellow band members. This is also Sinclair’s personal journey; no posthumous praise can bring her father back, but—along with his music—it helps. Extras comprise additional interviews and featurettes. 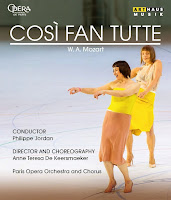 Mozart’s delectable comic opera about two couples who, after many trials and tribulations, are finally reunited is transformed by director-choreographer Anne Teresa de Keersmaeker into a roundelay among a dozen performers, six singers doubled by half-dozen dancers, who become a physical manifestation of the indelible Mozart-del Ponte characters.

What begins as an intriguingly different take on a familiar work soon becomes repetitious and even confusing as the dancers basically cover the same ground as the music and words—it’s ultimately redundant, if cleverly staged and impeccably danced and sung. Hi-def video and audio are first-rate. 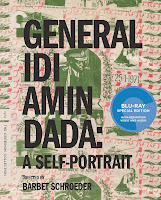 In 1974, French director Barbet Schroeder made this documentary about the infamous Ugandan dictator, who relished the attention of a European filmmaker immortalizing him.

Amin was charismatic and murderous, charming and ruthless; Schroeder catches all of that, but the relatively short 90-minute running time makes this a less than ideal portrait: we see the venom, but not the psychology. The excellent new transfer is buttressed by two Schroeder interviews (2001 and 2017) and an interview with journalist Andrew Rice about Amin. 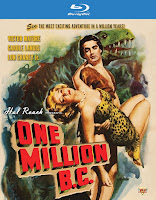 Movie fans know the late ‘60s version starring a loin-clothed Raquel Welch; the 1940 original has a poor substitute in Carole Landis and features a stolid Victor Mature and Lon Chaney Jr. running around looking embarrassed fending off awful-looking dinosaurs and other prehistoric monsters.

Directors Hal Roach and his son’s barely passable entertainment with incredibly chintzy special effects is a mildly diverting (and, at 80 minutes, harmless enough) piece of movie history. The hi-def transfer is decent. 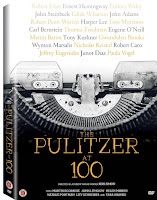 Kirk Simon’s documentary of the history and legacy of the Pulitzer Prize is an uninspired overview of the world’s most important arts and cultural award, and includes interviews with Pulitzer voters and recipients in an attempt to explain how diverse groups of people vote for what they think is the best play, piece of music, journalism, etc., in any given year.

Most interesting are the occasional breakaways to, say, a Natalie Portman or a John Lithgow reciting excerpts from winning plays or poems by winners Eugene O’Neill, Arthur Miller and Robert Frost. 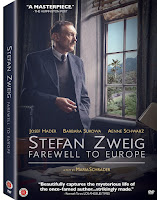 The great Austrian writer Stefan Zweig lived out his last years in South America, committing suicide (along with his young wife Lotte) in 1942 in Rio at age 61. His troubled existence was marked by accolades but also exhaustion after Adolf Hitler’s rise heralded a final decade of wandering, homeless and unable to return to his native Austria.

The Belgian Dardenne brothers’ incisive character studies over two-plus decades vary wildly in quality—implausibility rears its ugly head more often than not—but their latest is one of their best. Adele Haenel is superb as Jenny, a young doctor who finds out that the title character, a desperate loner who knocked on her office door but was refused entry, is found dead nearby.

We get caught up in Jenny’s plight as she tracks down the dead woman’s identity and family. This is the Dardennes at their most humane, helped enormously by Haenel, an actress capable of mercurial and quicksilver changes and shifts in emotion.

The end of British rule in India is the subject of Gurinder Chadha’s straightforward, tactful docudrama, with Hugh Bonneville as Lord Mountbatten, sent to India by his majesty’s government to secure a peaceful transfer of power; he is surprised by how awful fellow Britons treat the supposed second-class citizens.

Bonneville and Gillian Anderson are a persuasive Mountbatten and wife Edwina, while the usual towering Michael Gambon steals scenes as Mountbatten’s duplicitous chief of staff. The lone extras are several deleted scenes.