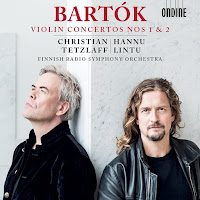 The violin concertos of Béla Bartók (1881-1945), separated by 30 years, are the works of first a youthful virtuoso gaining his footing and then of a sublime master.

That’s not to say that the first concerto (1908) is in any way inferior; in soloist Christian Tetzlaff’s dazzlingly capable hands, it’s a beguiling, buoyant piece of music (Bartók wrote it for a young woman violinist he was head over heels for), while the second concerto (1938) is, simply, a mesmerizing masterpiece. Both are played with great feeling by Tetzlaff and the Finnish Radio Symphony Orchestra, conducted by Hannu Lintu. 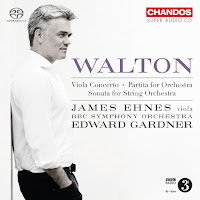 William Walton (1902-1983) has a reputation as a facile composer who penned Laurence Olivier’s Shakespeare scores and royal coronation marches, but his output was far more wide-ranging and substantial than that. The works on this disc combine his facility for memorable melodies with his skill for equal parts darkness and light.

The impassioned Viola Concerto, despite being revised twice—the second time more than 30 years after it was first composed in 1929—manages to retain a completeness all its own, buoyed by soloist James Ehnes’ lovely playing. The Sonata for String Orchestra—a transcription of his own A Minor Quartet—and Partita for Orchestra alternate between verve and lyricism; conductor Edward Gardner and the BBC Symphony Orchestra bring out the works’ musicality. 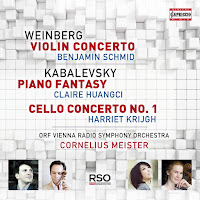 The remarkable renaissance continues for Russian composer Mieczyslaw Weinberg (1918-1996), who has gone from nearly unknown to towering genius thanks to a flurry of recordings and performances over the past decade or so. This disc pairs his striking and lyrical Violin Concerto (1959)—played with apt vigorousness by Benjamin Schmid—with two attractive concertos by another under-the-radar Russian, Dmitry Kabalevsky (1904-1987), Weinberg’s contemporary in the Soviet music sphere.