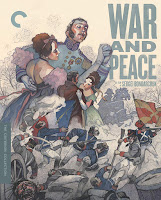 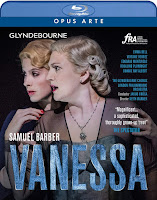 Samuel Barber’s volcanically romantic opera—with a distinctively Hitchockian atmosphere of lost and new loves—has some of the composer’s most achingly melodic music, perfectly encapsulating how the women at the opera’s center (Vanessa, her niece Erika and the Old Baroness) react to the men in (and out of) their lives. 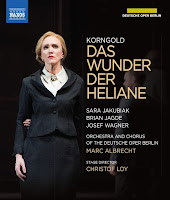 Erich Korngold’s fantastical opera—which gets a rare staging at Bard Summerscape a couple hours north of Manhattan at the end of July—is filled with extraordinary music and absorbing if diffuse drama.

Christof Loy’s 2018 Berlin staging highlights Korngold’s dazzling dramaturgy and musical ambition, and has a phenomenal heroine in American soprano Sara Jakubiak, unafraid to take Korngold at his word and appear nude for the end of the first act. This fearless performer and magnificent singer holds together an opera that threatens to become unwieldy in its final act. Hi-def video and audio are impeccable; lone extra is a rare 1928 recording of the third act prelude.

This 1958 adaptation of the hit stage musical has dated badly, especially in the cheeky but toothless humor of the devil needing a sexpot to keep his baseball protégé in line.

Ray Walston is hammily unfunny as Mr. Applegate (i.e., the devil), while Gwen Vernon only shines in her—too infrequent—song-and-dance numbers, the best a goofy mambo with choreographer (and soon-to-be husband) Bob Fosse. Otherwise, directors George Abbott and Stanley Donen’s concoction may disappoint fans of both baseball and musicals. Still, this deserves a vibrant new hi-def transfer on Blu-ray.

Few actresses are as emotionally forthright as Anna Friel, and she lets it all hang out as Marcella Backland, a detective whose life is in a shambles, both personally and professionally.

It’s too bad, then, that the storylines cooked up to accompany her fragile mental state often approach risibility instead of plausibility, making a mockery of the character and the superlative actress playing her.

Marine Francen’s beautifully written, directed and photographed drama (based on a true story) set in the mid-19th century French countryside follows female villagers who, after the local men have been rounded up by the authorities, decide to share the next one who arrives: when this handsome stranger falls for the shy and unassuming Violette, it threatens to erode the women’s close relationships.

This exquisitely crafted exploration of sexual dynamics, tension and jealousy leads to a low-key but heartbreaking ending devoid of sentiment. Francen’s use of the near-square Academy framing adds a heightened claustrophobia to the proceedings, and her lead actress, Pauline Burlet, is a winning presence. Lone extra is Francen’s short, Les Voisins. 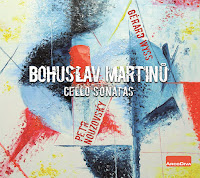 I called Czech composer Bohuslav Martinů among our most underrated when I reviewed a two-disc set of his violin and orchestra music earlier this year. Now we have two more excellent Martinů recordings. Czech cellist Petr Nouzovský teams with Swiss pianist Gérard Wyss for estimable readings of Martinů’s three sonatas for cello and piano, formidable works that should be more widely known. 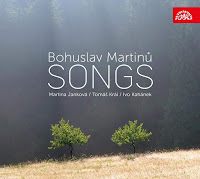 Although Martinů was a prolific opera composer, his other vocal works are obscure, so this disc of his songs based on folk melodies is a welcome addition. Performed with delicacy by a Czech trio—soprano Martina Janková, baritone Tomáš Král, pianist Ivo Kahánek—these four song cycles show a tender side of this most talented composer.