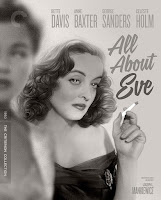 One of the all-time Hollywood classics, Joseph Mankiewicz’s nasty, hilarious and witty satire of theater, movies and celebrities swept the 1950 Oscars and remains one of the most watchable movies ever made about show business. Bette Davis, Anne Baxter, George Sanders, Celeste Holm and Thelma Ritter are pitch-perfect, while Mankiewicz’s endlessly quotable script is a marvel of concision and bitchiness.

Criterion’s hi-def transfer is similar to Fox’s from 2011 and many extras from the Fox release (Mankiewicz documentaries, interviews, etc.) are included. Shockingly, Criterion’s packaging is shoddy: my booklet was torn since it was stuck to the foam knobs that hold the discs in place, and it’s difficult taking the discs out without worry about breaking them. It’s a rare whiff from what’s usually the best video company for packaging. 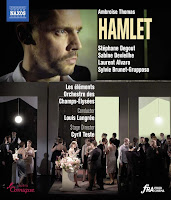 French composer Ambroise Thomas premiered his adaptation of Shakespeare’s Hamlet in 1868, and it’s a spectacle of pageantry, tragedy, drama—along with a happy ending (Hamlet survives and becomes king). Despite that central absurdity, it’s a sturdy example of 19th century French grand opera, and director Cyril Teste’s 2018 Paris Opéra-Comique production looks and sounds terrific, including its use of onstage video.

Conductor Louis Langrée ably marshals the forces of the Orchestre des Champs-Elysées and Choeur Les Eléments, and the formidable cast is headed by baritone Stéphane Degout as Hamlet and a searing and emotional Sabine Devieilhe as the ill-fated Ophélie. The hi-def video and audio are tremendous. 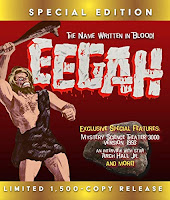 Nicholas Merriweather’s shoddy 1962 low-budget attempt at horror about a caveman who terrorizes a young woman, her boyfriend and her father is in Plan Nine from Outer Space territory as one of the worst movies ever made.

That’s apparently the selling point: this cheesy, laughable flick—containing several of the all-time amateurish performances—has been given a splendid hi-def transfer; extras include the Mystery Science Theater 3000 episode where the hosts crap all over it and interviews with MST3K creator Joel Hodgson and actor Arch Hall Jr. 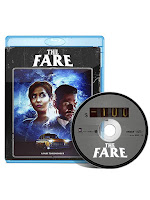 What starts as a shape-shifting Twilight Zone episode soon turns lugubrious as a cabbie and the young woman who keeps getting in—and disappearing from—the back seat try to discover why they’ve been thrown together. 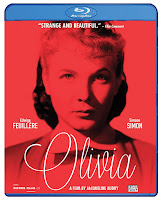 In Jacqueline Audry’s 1950 drama, a young women’s boarding school is the setting for a series of physical and psychological clashes between factions of students and their headmistresses. Audry’s fresh and exuberant lesbian study never feels forced or false even when she’s up against the constraints of her era.

Her filmmaking is original enough for viewers to want to see what else she did—including her Colette-approved 1949 adaptation of Gigi—so one hopes more restored Audry films are forthcoming. The hi-def transfer of a new restoration is sparkling in B&amp;W; lone extra is a vintage Audry interview. 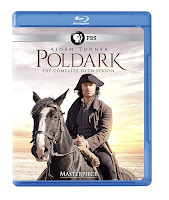 In the engrossing final season of the latest television incarnation of Winston Graham’s classic novels, several years have passed since we last saw these characters, but the internal dramas and external political forces driving them remain forcefully and rivetingly intact. 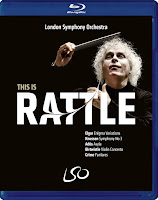 Rattle then guides his forces through Oliver Knussen’s thornily satisfying Symphony No. 3 before finishing with Edward Elgar’s magisterial Enigma Variations. Hi-def video and audio are top-notch.

Maria Semple’s 2012 novel about a middle-aged wife and mother who takes off after her artistic creativity has been stifled has been made by director Richard Linklater into a cutesy, enervating dramedy.

Cate Blanchett gives an unfocused performance in the title role and Kristen Wiig trots out her usual mannerisms as a next-door neighbor, while Billy Crudup and Emma Nelson’s earnest portrayals of Bernadette’s husband and teenage daughter are wasted. Even a finale set in Antarctica can’t save this wishy-washy display. There’s a fine hi-def transfer; extras comprise two making-of featurettes. 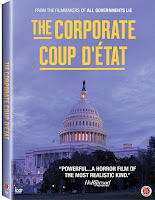 Fred Peabody’s documentary ponders the corporatization of America—not only obvious stuff like Citizens United, but also the incremental ways that Democrats and Republicans have allowed individual liberties to erode and take a backseat to corporations and billionaires, setting us up for the disaster that is the tRump presidency.

You don’t have to agree with everything in the film by an array of talking heads from Matt Tiabbi to Cornel West to be incensed at how much in tatters our 200-plus year-old experiment in democracy is.

Trine Dyrholm gives her usual masterly performance as a lawyer for battered and abused victims who has a torrid affair with her troubled 17-year-old stepson. Although director/cowriter May el-Toukhy doesn’t develop the intricacies of such unethical behavior as penetratingly as possible, Dyrholm’s incisive characterization greatly compensates.

Also noteworthy are Gustav Lindh as her young lover and Magnus Krepper as her husband, along with the raw but redundant sexual explicitness in the couple’s first encounter. 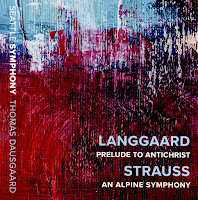 The Seattle Symphony’s new music director Thomas Dausgaard capably leads the orchestra in works by Rued Langgaard and Richard Strauss in his first recording at the helm.

Dausgaard conducted the world premiere of Langgaard’s opera Antichrist, and the dynamic and unsettling prelude is a 12-minute orchestral tour de force. And Strauss’ An Alpine Symphony, a vigorous workout for large orchestral forces, is another aural triumph for Dausgaard and his talented Seattle ensemble.