The Bad and the Beautiful

Vincente Minnelli’s 1952 Hollywood drama might not have the incisiveness of All About Eve or the darkness of Sunset Boulevard, but its story of a ruthless producer and those he uses along the way—including an actress, writer and director, all of whose tales we see—is an unalloyed delight, a sheerly entertaining glimpse of the movie business.

The Battle of Leningrad

The exhausting 900-day Nazi siege of Leningrad from 1941-43 is dramatized in this heroic but superficial war film that displays the horrors the Soviets went through but also their indomitable spirit while fighting a superior foe.

Although writer-director Aleksey Kozlov’s impressive physical production highlights the tension onboard a defenseless barge and its overflow crowd fending off German bombers, this otherwise standard-issue war drama gets most of its resonance by remembering those who died for their country. The movie looks spectacular on Blu. 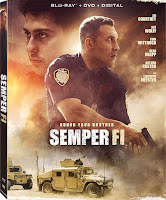 Henry-Alex Rubin’s earnest if familiar melodrama about a police officer who’s also a Marine reservist who helps get his half-brother out of prison when he’s unfairly convicted wears its heart on its sleeve but can’t compensate for the script’s myriad clichés. 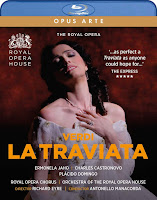 Giuseppe Verdi’s classic opera about a famed courtesan is a dazzling showcase for a soprano, and Albanian singer Ermonela Jaho thrillingly goes for broke in her emotive characterization, so much so that she actually looks consumptively shrinking at the end of Richard Eyre’s handsome Royal Opera House (London) production.

As her lover and his father, respectively, Charles Castronovo and legendary Placido Domingo acquit themselves well. It’s adeptly conducted by Antonello Manacorda, leading the Orchestra of the Royal Opera House. Hi-def video and audio are first-rate. 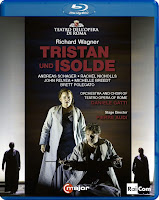 Richard Wagner’s epic tragic romance has some of the most moving music ever written for the operatic stage—along with two of opera’s most punishing vocal parts. In Pierre Audi’s 2016 Rome staging, tenor Andreas Schager does wonders with minimal strain as Tristan, while soprano Rachel Nicholls does Herculean work as Isolde, especially in the draining, climactic Liebestod.

The World, the Flesh and the Devil

Radioactive airborne matter has seemingly wiped out the earth’s population: except for a miner who was conveniently underground, played by Harry Belafonte. He goes to Manhattan to begin anew...but soon two others appear, and this thrown-together trio must deal with the end of civilization—and the possible beginning of another.

The Ground Beneath My Feet

Valerie Pachner’s persuasive portrayal of an employee of a powerful consulting firm whose personal and professional lives are put to the test when her mentally unbalanced sister’s condition worsens at the same time her work at the firm is given unfair scrutiny is the heart of Marie Kreutzer’s insightful character study.

Pachner dominates the screen in a physically and psychologically transfixing performance, whether she’s on a bracing run or dealing with discrimination from coworkers or the guilt she feels over her sister.

The Miracle of the Little Prince

Saint-Exupéry’s classic fable The Little Prince has survived since its 1943 publication (preceding the author’s death in World War II) as a work that children and adults of all ages love, but director Marjoleine Boonstra explores another aspect of its endurance in this forthright documentary.

The novella has been translated into hundreds of languages, including some on the brink of extinction, and Boonstra visits those who have translated the book into Tamazight (Morocco), Nahautl (El Salvador), Sami (Scandinavia), and Tibetan to record how it has allowed those languages to survive. If only the film wasn’t so long—it’s only 89 minutes, but reading excerpts and showing picture-postcard shots of the various landscapes do nothing but stretch the running time. 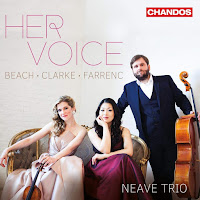 In the 19th century, composers Clara Schumann and Fanny Mendelssohn were more famous for being attached to a more famous husband and brother, respectively. These two discs highlight a quartet of accomplished 19th and 20th century composers who happen to be women. Her Voice is the latest from the excellent Neave Trio, which eloquently performs spirited trios by three original voices: France’s Louise Farrenc (her 1843 trio), American Amy Beach (her 1938 trio) and Brit Rebecca Clarke (her 1921 trio).

The other disc brings together two works by British composer Ethel Smyth: the overture to her forceful 1904 opera The Wreckers and her Mass, a painstakingly realized work from 1891 (revised in 1925). Sakari Oramo skillfully conducts the BBC Symphony and Chorus and four fine soloists in her Mass.