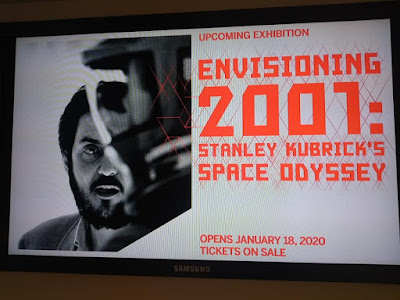 Now firmly on any reputable Greatest Films of All Time list, Stanley Kubrick’s 2001: A Space Odyssey is one of the visionary director’s most inscrutable, puzzling and, paradoxically, satisfying films. The director’s peregrination from contacting author Arthur C. Clarke to collaborate on what was first titled Journey Beyond the Stars to premiering a nearly three-hour trip through time and space was one of many he took to bring his challenging, often polarizing ideas to fruition onscreen.

Envisioning 2001: Stanley Kubrick’s Space Odyssey, at the Museum of the Moving Image in Astoria, Queens, until July 19, is a remarkably wide-ranging exhibition that takes visitors through Kubrick’s constant re-envisioning of what would become the greatest science-fiction film ever made and among the most complex narratives from a major studio to ever grace the screen.

The exhibit is filled with ephemera anyone with even a remote interest in 2001 would want to see—Kubrick’s voluminous correspondence; his detailed notes, many written (or typed) on index cards; models of several of the film’s space ships; examples of the costumes and set designs; audio interview with Dan Richter, who played the ape-man Moonwatcher in the Dawn of Man sequence; Moonwatcher’s head, the helmet of one of the astronauts, and even the cap of the Pan Am stewardess; and Kubrick’s lone Oscar statuette—he unbelievably never won for Best Director—for Best Special Effects.

Kubrick’s singular brilliance dominates the exhibition, not least in his carefully-worded—some might say pedantic—letters filled with questions and anaylsis and trivia that he sent to space experts from NASA and others. Kubrick’s use of music, one of his greatest filmmaking innovations, arguably reached its apogee in 2001, whose uniqueness is seen and heard in a section of the exhibit where the famous opening sequence is shown with both Alex North’s original music—an effective but obvious Hollywood score—and Kubrick’s “temp” choice that became permanent, Richard Strauss’ rousing intro to Also sprach Zarathustra.

Kubrick’s genius also shines through in the film series accompanying Envisioning 2001, which comprises features that informed Kubrick’s approach as 2001 took shape, several of which will be screened during the exhibition: Polish director Jindřich Polák’s visionary 1963 sci-fi mystery Ikarie XB-1 and Ingmar Bergman’s classic psychological portraits Wild Strawberries and The Virgin Spring, among them. And, to top it off, 2001 itself will be screened monthly in a 70-millimeter print, providing more opportunities to take another exhilarating journey beyond the stars with Stanley Kubrick.