Director Marco Pontecorvo—the great filmmaker Gillo Pontecorvo’s son—has made a satisfying dramatization of the apparition of the Virgin Mary seen by Lucia and two other children in Portugal in 1917 and its many ramifications.

By giving equal weight to skepticism (through the characters of Lucia’s mother, the local mayor and—in a 70-years-later subplot—a professor who debates Lucia, now an elderly nun) and belief, and visually differentiating them without copying Terrence Malick’s inspired mysticism, Pontecorvo’s well-made anti-spectacle is anchored by excellent performances: Alba Baptista as Lucia’s mother, Harvey Keitel as the layman, Sonia Braga as Lucia the nun and Stephanie Gil, a fantastic child actor, as the young Lucia.

In a fearless bit of cinematic reportage, Eric Merola balances voluminous evidence and insightful interviews with the principals to explain what took down the national bank of the tiny European principality of Andorra: the Spanish government covertly pulled the strings to stop the Catalan independence movement in its tracks.

Merola lays out in detail and with the calm clarity of a topnotch detective how this was done with approval by authorities in Europe and—of course—the United States. A special shout-out goes to the defense lawyers trying against imposing odds to clear innocent clients, who deposited their savings in the bank but are unable to retrieve it.

In time for the 75th anniversary of the end of the war in the Pacific, director Erik Nelson has taken newly discovered and restored color footage—as U.S. forces had the Japanese on the run, culminating in victories at Iwo Jima and Okinawa, incendiary bombing of Japanese cities and dropping of atomic bombs on Hiroshima and Nagasaki—and made a fascinating, you-are-there historical document.

Throughout we hear the voices of those who were there, two dozen veterans of the Greatest Generation giving their observations and memories of those victorious days; fittingly, Nelson gives the last 10 minutes over to their faces and names, a most deserved honor.

Along with showing their performances, Wharton interviews many of them, including an unusually talkative Bob Dylan; some (like Nile Rodgers and Rosanne Cash) even taking their turns reading Carter’s homespun poetry. Carter, now age 95, speaks lucidly and honesty about his kinship with music and musicians. The film won’t make viewers reconsider his one-term presidency, but his openness to all people, cultures and our shared humanity is on display.

Nanni Moretti’s 1994 triptych comprises episodes that vary widely in amusement and dramatic interest while representing the states of the filmmaker/narrator’s mind, from the zesty (“On My Vespa,” with Moretti motoring around Rome) to the negligible (“Islands”—unfortunately the longest—about an island where parents let children run things) and the deadly serious (“Doctors,” recounting Moretti’s harrowing cancer treatment).

The tone wavers uneasily throughout, not surprisingly, but Moretti has always had a light touch that helps the film—and viewers—through some of the rougher spots. There is a terrific new hi-def transfer; extras are an on-set featurette and a deleted scene.

This 1979 documentary written and conceived by Nigel Carter (which originally aired on BBC, the  PBS) aims to make Albert Einstein’s genius accessible to the average viewer, so it has British actor Peter Ustinov as our narrator/tour guide of sorts, being alternately dazzled and bewildered by the astonishing variety of Einstein’s studies.

Of the many onscreen scientists, some are better than others at speaking in plain English about such abstruse subjects; there are also a few ill-conceived sequences of Ustinov partaking in wacky visualizations of some of Einstein’s theories. There’s a fine new hi-def transfer. 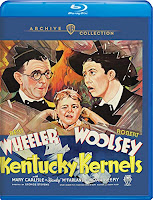 This mild, dated 1934 comedy one historical claim to fame: it’s George Stevens’ solo directorial debut. Yes, the director of Giant, The Diary of Anne Frank and The Greatest Story Ever Told got his start with a creaky vehicle for then-famed comic duo of Bert Wheeler and Robert Woolsey—along with a very young (and pre-Little Rascals) Spanky McFarland, who steals the show as the rambunctious orphan who’s the catalyst for what little plot there is.

It’s all relatively painless and, at 74 minutes, mercifully short. There’s an excellent new hi-def transfer of this slight black-and-white non-classic; extras are a vintage short and cartoon. 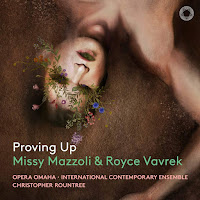 For her third operatic collaboration with librettist Royce Vavbrek, composer Missy Mazzoli has taken a short story by Karen Russell about a family of 19th century midwestern homesteaders and turned it into a spectrally eerie, dramatically dynamic one-acter.

With superlative performances and remarkably agile playing from the International Contemporary Ensemble, Proving Up proves that Mazzoli can make opera classic and contemporary simultaneously—especially when the supernatural aspect arrives, entirely naturally and with beautifully and hauntingly atmospheric music.