Blu-ray Release of the Week 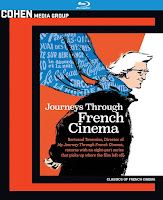 Bertrand Tavernier’s Journeys Through French Cinema
(Cohen Media)
When Bertrand Tavernier died on March 25, the film world not only lost one of its greatest directors but also one of the very best cinema historians around. Proof of that has just been released on Blu-ray: Journeys Through French Cinema, an eight-hour series in which Tavernier discusses many of his favorite French films and filmmakers in his usual engaging and thoughtful style.
In 2016, Tavernier created My Journey Through French Cinema, a 190-minute, deeply personal chronicle of what most moved him onscreen since he became besotted with movies in his youth, growing up in Lyon and later when he moved to Paris. It was done so beautifully, so charmingly, so admirably that I wished it would go on for several more hours.
Now, with Journeys Through French Cinema, my wish has been granted: over eight one-hour episodes, Tavernier dives even more deeply into his favorites over six decades of movie watching, starting with two episodes’ worth of “My Go-To Filmmakers,” those directors who have influenced Tavernier, both personally and artistically. He even goes so far as to ingeniously pair two cinematic giants most wouldn’t think to link: Robert Bresson and Jacques Tati. (He also does the same, more questionably to my mind, with the great Sacha Guitry and not-so-great Quentin Tarantino.)
For the remaining six segments, Tavernier passionately guides the viewer through his own prism of French film history, from the great film composers and those directors who worked during the Nazi occupation of France, to those films made after World War II until the coming of the New Wave, through the final section “My Sixties,” during which Tavernier became a film press agent and was able to promote those films and filmmakers he especially admired.
For lovers of French film such as myself, it’s always a pleasure to see such wonderful scenes from classic films by Raymond Bernard (whose 1934 Les Miserables is, at nearly six hours, the most thorough and impressive adaptation of the Victor Hugo novel), Sacha Guitry (whose witty and boisterous comedies of manners are always a treat) and Henri-Jacques Clouzot (whose classic thriller, 1953’s The Wages of Fear, remains indelible).
As always with Tavernier—who, the handful of times I spoke with him, was a font of knowledge, enlightened conversation and natural friendliness—there are priceless anecdotes, brilliant insights and treasured observations: there are many moments during these eight hours when Tavernier’s passion comes through so forcefully that you feel his warmth, his embrace, his unique personality attuned to all things cinematic.
As for Tavernier’s many films—he made 22 features, from 1973’s extraordinary debut The Clockmaker to 2013’s satirical The French Minister, along with a handful of other documentaries, including his shattering four-hour exploration of the French-Algerian War’s effects, 1991’s The Undeclared War—where to start?
I’d start with A Sunday in the Country, his exquisite 1984 chamber drama about a day in the life of an aging minor painter whose dutiful son and family come to visit, along with his frivolous (and single) daughter, and the unfair realities of existence—the old man is indifferent to his son but adores his daughter—are shown in all their hilarity and heartbreak, scored to the luminous chamber music of French master composer Gabriel Fauré. It’s available on Blu-ray from Kino Lorber, with a typically listenable Tavernier audio commentary.
Another way to see several more superb Tavernier films is the Criterion Channel, which is streaming
nine of his very best, most characteristic films under the title “Directed by Bertrand Tavernier.” Alongside The Clockmaker and A Sunday in the Country are the beautifully realized intimate character study, 1980’s A Week’s Vacation; the forceful crime drama, 1976’s The Judge and the Assassin; the acidic black comedy, 1982’s Coup de Torchon; and the incisive, potent antiwar chronicle, 1996’s Captain Conan.
So start somewhere, anywhere, and enter the singular and unforgettable cinematic universe of Bertrand Tavernier, which has a richness rarely equaled by any other director.