A Look at Five of Sundance's Most Buzzed About Films

A Look at Five of Sundance's Most Buzzed About Films

Set in the mountains of Utah, the Sundance Film Festival has solidified a top spot for must-go indie film festivals. With over 4,000 submissions and 119 selected this year alone, there’s no shortage of talent going on here. The Sundance Film Festival 2013 began last Thursday, January 17, and wraps up this Sunday, January 27. With so many films being shown, there are surprise hits, fan favorites, some divisive pictures and basically just a lot to talk about. 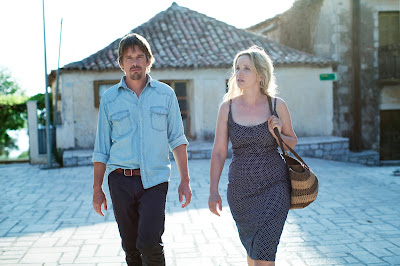 Rounding out a truly one-of-a-kind trilogy, Richard Linklater’s Before Midnight brings us back to ill-fated lovers Jesse and Celina’s (Ethan Hawke and Julie Delpy) walking-and-talking through foreign landscapes antics. Where Before Sunrise let us roam Vienna as the young dreamers discussed life and love and Before Sunset brought us to Paris nine years later, exploring themes of adult responsibility and choice, Before Midnight begins another nine years on with the couple still together, now the parents of two young girls, who discuss with fervent realism their entry into the later part of life.

“Midnight is an impressive (and exquisitely shot) showcase for its stars matured performances: naturally warm, witty and intimate.”

“Before Midnight is satisfying for fans of Celeste and Jesse’s relationship, but it’s also satisfying for anyone searching for some real talk about the nature of romance, love, and fidelity. This is an adult movie, made by adults for adults, and it’s one of the most fulfilling modern love stories to hit theater screens in quite some time. It’s funny and brutal and wrenching and honest and true, and it’s an absolute pleasure to watch.”

Even those without love of this relationship decades in the making had positive things to say of the final act in the triad. Mike Ryan of Huffington Post said --

“I will say that this film is the most relatable of the three because they seem like real people, not just caricatures of some sort of "true love" fantasy. Before Midnight is by far my favorite of the "Before" series of films.”

“Before Midnight leaves you both shaken and satisfied, and these characters have evolved to the point where everyone will probably want to check in with them again in another nine years.”

The Verdict: Before Midnight manages to live up to expectation with fans and win over newcomers alike, earning it the title of trilogy’s best.

A lot of love has been thrown Joseph Gordon Levitt’s way over the past few years. His transformation from Hanson-haired Third Rock From the Sun-er to international super-star has been deserved as he’s proved he knows how to showcase his talent and whose hands to put said talent into. After working under Christopher Nolan for both Inception and The Dark Knight Rises and Rian Johnson for Brick and Looper, Levitt has decided to try his own hand at directing/writing with Don Jon’s Addiction as his first effort. The initial reviews say-- he knows what he’s doing. The slightly askew tale follows the tribulations of player Don Jon (Levitt) and his affinity of porno.

Allison Loring of Film School Rejects admits that while the film can make those uncomfortable with the heavy-handed amount of sexually explicit material, it was still a might success for a first time director --

“Don Jon’s Addiction is an impressive directorial debut from Gordon-Levitt (who also wrote the script) bringing to the screen a fully realized character who is searching for something, but doing so down all the wrong avenues.

The praise continues to pile up with Germain Lussier of Slashfilm, who gave the film an 8/10 --

“That Don Jon’s Addiction, with its energetic tone, upbeat pace, and important message, comes from a first time director is incredible. That the director is one of our most popular actors is even more impressive.”

Others weren’t so kind with Logan Hill of Esquire calling the film “Shame: the romantic comedy.” He went on to criticize the unnatural feel of the film and his perceived miscasting of Levitt --

The picture has already sold to Relativity for a heft four million dollars. Levitt had the following to say--

“I always intended this to be a movie for a mass popular audience. Everyone told me it was a long shot. Now Relativity is making it happen. Tucker Tooley and Robbie Brenner told me they believe that, more than anything, audiences want something unique.  I couldn’t agree with them more. I admire them for putting their money where their mouth is. And I couldn’t possibly be more grateful.”

The Verdict: Although the film’s premise may be hard for some to swallow, Levitt handles the weight of writer/director/star responsibility with care and proves he may have continuing worth in the directorial game. 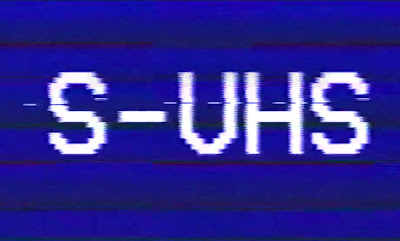 While last year’s cult hit V/H/S hardly reinvented the wheel with its found footage montage premise, it made waves in the horror genre for doing what horror movies should -- scaring the pants off people. This structureless compilation follows almost exactly in the footsteps of its predecessor with five short horrifying segments that lack a strong central thread tying them together, but how is the reaction to this newest incarnation?

“This time around, it feels like every filmmaker is right in their wheelhouse, presenting a polished, terrifying vision.  Even the wraparound segment, whose function only really needs to be expositional, has a much more compelling element to its mystery.”

Garnishing a B- from Film School Reject contributor Rob Hunter, Hunter said that while it’s no game-changer, it accomplishes exactly what horror movies strive to accomplish. It’s scary and fun --

“Inconsistency aside, this franchise remains a shot in the arm for horror fans, and it would be great to see them continue to make it an annual tradition with new writers/directors sharing billing each time. They’re quick and inexpensive to produce, and the results are rarely less than fun. What else could you want from a horror film?”

Slashfilm Germain Lussier piled on the commendation, chalking up a 8 out of 10 --

“Long story short, the movie is awesome, surprising, and you should avoid any and all mentions of what each of the four shorts contains, if at all possible. Fans of the this first film will love S-VHS and anyone who hasn’t seen the original will immediately run to it after this. S-VHS is horror at its most entertaining.”

Another positive review from Samuel Zimmerman writing for Fangoria stated --

The Verdict: Fans of the horror genre are sure to get a big rise out of this superior sequel but it most likely won’t win over those who aren’t already a fan of the genre. 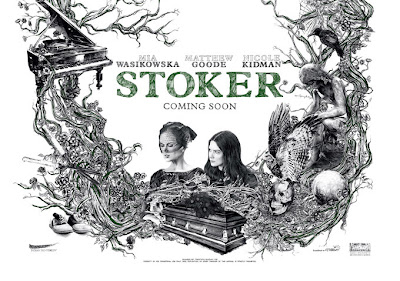 Mali Elfman of Screen Crave gave the film a rave review, award it 9.5 stars out of 10, claiming --

“Stoker slowly unravels, revealing one piece of the puzzle at a time, and always having you fully engaged to all that he’s presenting to you....His craft is far superior to others and he demonstrates this by creating a challenging, beautiful, expertly well made film, that is truly an inspiring to any film-maker or film-lover.”

“Park Chan-wook's English-language debut is a gorgeously mounted family mystery dressed up as a gothic fairytale. The atmosphere is suffocatingly effective, and if the scarcity of shocks leaves some viewers feeling cheated, this misdirection is also one of the movie's great strengths.”

Continuing to layer on the praise, Fred Topel of Crave Online called it the best so far from Sundance but also noted that that does not necessarily mean that it’s a masterpiece in it’s own right --

“It’s not quite “blow me away, tell everybody they need to see this” good. I’m still hoping to discover one of those, but as one of the few studio films playing, with a high pedigree of talent involved, Stoker went above and beyond and is an example of strong storytelling to which any mainstream film should aspire.”

“Stoker is appallingly empty, relying on overwrought conversations and endless shots of a silently brooding India... Layer that with Park’s insistent visual sense and a total lack of subtlety with dialogue and theme, and the film collapses under all the weight.”

“Once the film starts to reveal its secrets, it moves quickly, and my biggest issue with the film is that I think they got really close to the great version of this movie...I wanted the craziest stuff in the film to matter more.”

The Verdict: Stoker is an extremely divisive film that some are already calling the knock-out hit of Sundance while others are holding back their congratulations. It’s sure to be equally divisive once it hits theaters next month. Actor Daniel Radcliffe seems to be doing everything in his power to expunge his association with the eponymous character from the Harry Potter saga, this time taking the mantle of the beatnik bard, Allen Ginsberg. The film centers around a murder that draws the superheroes of the beatnik generation, Allen Ginsberg, Jack Kerouac and William Burroughs, together Avengers-style.

Katey Rich of Cinema Blend called Radcliffe’s performance one that “seems to prove that he really is an actor worth watching.” She went on to say --

“Kill Your Darlings is even more accessible and entertaining than last year's Kerouac adaptation On the Road, and fans of Radcliffe and DeHaan could have the power to make it a small-scale hit. Even audiences who think they're exhausted by the endless lionization of the Beats ought to be able to find something new in this surprisingly resonant and beautifully acted film.”

From The Guardian, Damon Wise notes the film’s complexity and depth as a pleasant surprise --

“It creates a true sense of energy and passion, for once eschewing the clacking of typewriter keys to show artists actually talking, devising, and ultimately daring each other to create and innovate. And though it begins as a murder-mystery, Kill Your Darlings may be best described as an intellectual moral maze, a story perfectly of its time and yet one that still resonates today.”

“Kill Your Darlings succeeds more than most in capturing the first flickers of the literary movement without hipster self-consciousness.”

But the praise stops there as others didn’t find themselves as enamored, Rodrigo Perez of Indiewire found a lot of issues with the subjects of the film, stating --

"Kill Your Darlings doesn't really humanize these characters beyond half-drawn caricatures in an origin tale that wouldn't be out of place in an average super hero film."

The Verdict: Stars Radcliffe, DeHaan and give this film a powerful soul as first time director John Krokidas mostly succeeds in taking the beatnik generation in a new and inspired direction.