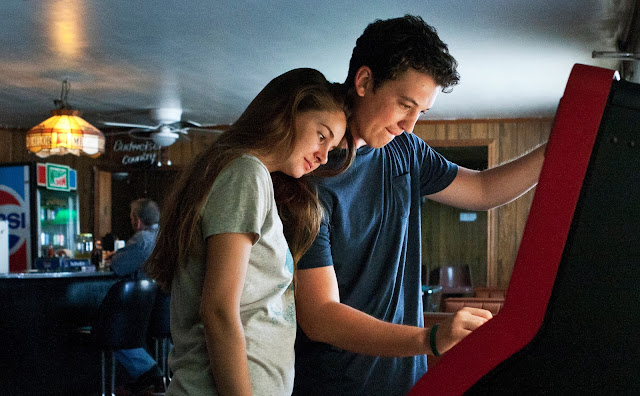 What do you get when you fold an affable high school comedy into a serious meditation on heredity and real-world relationships? Apparently a winning formula as The Spectacular Now manages to merge comedy and drama seamlessly. Instead of the competing comedic and tragic elements compromising each other's effectiveness, both sides benefit from the inclusion of the other and result in a film that's both genuinely funny and emotionally meaningful. Relative newcomer Miles Teller (Project X) lights up the screen as Sutter Kelly and the many relationships he surrounds himself with are earnest but guarded, bitter yet sweet - much like the film itself.
The film opens within a somewhat retread formula as Sutter responds to a college application asking him to recount the most difficult challenge he has had to overcome. Even though his Dad is out of the picture, Sutter has mostly skated through life with semi-charmed naivety. As far as he sees it, being a white-collar, middle-class child of a single parent hasn't been particularly hard for him. However, we eventually learn though that this is only the impression he wants to give off.
Instead of searching himself to truly discover the hardships of his life, he slams out a half-hearted essay on getting over his recently ex-girlfriend, Cassidy, played by Brie Larson (United States of Tara). Playing the part of the jester has become his calling card so it's no wonder that he can't take a question about personal challenge seriously.

In the process of moving on from this generic "he's cool, she's cool" high school relationship, Sutter falls deep into an alcoholic stupor. After a night of particularly heavy drinking, Sutter wakes up disoriented and car-less in Aimee Finnicky's lawn. Unlike Sutter, Aimee Finnicky, played by Shailene Woodley (The Descendants), is not popular. She agrees to help him find his car and they strike up an unlikely relationship. Unlike the superficial sexual scourging of his past, Sutter surprises himself with how gentle and earnest his relationship with Aimee is. Finding similarly wounded souls in each other,  they begin to reveal their unlicked wounds that have caked up over the years.

It's not like we haven't seen the formula of 'popular boy who dates an unpopular girl and ends up falling in love with her' before but it's never been quite like this. Instead of the cheap, formulaic third-act revelation of "You only dated me because of blank?!" or "First Name Last Name, you broke my heart", this leads to something far more genuine and poignant on every front. Instead of an easy escape, director James Ponsoldt straps his characters in and sets them on an emotional crash course within their respective families. Since we genuinely feel for these injured and innocent characters, we want them to succeed, we want them to find happiness and we want them to grow, making it all the more difficult when we see them falter and stall out.

With the late high school setting, breezy comic sensibility and similar visual palette, I felt like I was in store from some kind of Superbad knock-off and couldn't shake the fact that Sutter looked like a lab experiment crossbreed of Fred Savage and Shia LaBeaouf matched with Jonah Hill's voice (see the film and you'll know exactly what I mean.) But as the film opened up its story to something larger than the transitory high school setting, it presented a whole other realm of storytelling potential. With this, it seizes that opportunity to become more than just low-brow comedy or story-boarded dramatics and captures a rare potency.

Whereas the first act thrives off of Sutter's comedic timing and the second on the Woodley and Teller's chemistry, as the film charges into its final act, Ponsoldt tips the film into more challenging territory. As the threads keeping Sutter's life together unwind, the performances step to the forefront and both Teller and Woodley handle the emotional gravitas with careful footing.

Piggy-backing on her critically acclaimed performance in The Descendents, Woodley is a rock. She steps inside of Aimee, embodying her easily won-over plain Jane with original flair. After being overlooked for Oscar gold for her last solid effort, I wouldn't be surprised to see her name on many prognosticators' lips this season.

As our tour guide through this whole venture, Sutter is an uncharacteristically complex teenager. Ponsoldt isn't afraid to step into the shadows and strip Sutter of his saccharine veneer and reveal the wounded, frightened child abandoned by his daddy. When forced to face his demons, even when the result is ugly, Teller demonstrates his full commitment to Sutter's character and presents a rounded and bold-blooded man-child stabbing holes in his own chrysalis.

Proving again that he can juggle sincerity and comedy, Ponsoldt does it even more effectively here than he did with his last effort Smashed. Where he could easily have descended into preaching or easy-outs, he chooses the difficult road because it more genuinely suits his characters and his story. As Sutter and Aimee race closer towards graduation, the film shifts towards a more philosophical approach, tackling what, exactly, this "spectacular now" means. Living life in the moment is Sutter's excuse for his incessant slacking and glossy lifestyle but upon meeting his deadbeat dad (Kyle Chandler), he realizes that maybe growing up is a necessary evil after all.

Dodging the stuffy trappings of many coming-of-age tales by reworking their stereotypes to its benefit, The Spectacular Now eclipses expectation. Instead of avoiding clichés entirely, Ponsoldt uses them to his advantage. And while the framework for the genre has clearly already been established, it rarely results in something this good and all around meaningful. It joins the ranks of The Perks of Being a Wallflower and Superbad as timeless films about the difficulty of transition and the promise of human connection while carving out enough of a name for itself to be remembered years down the line.