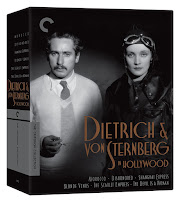 Dietrich and von Sternberg in Hollywood

One of the Criterion Collection’s best recent boxed sets is this six-disc journey through the groundbreaking films made by director Josef von Sternberg and star Marlene Dietrich in the 1930s, including such classics as Blonde Venus and Shanghai Express. Dietrich’s persona—aloof but endlessly fascinating—was cemented through these pictures, and von Sternberg provided the most elegant vehicles for her talent.

The new hi-def transfers of these 80-plus-year-old B&W films are nothing short of astonishing; many extras include new and archival featurettes and interviews. 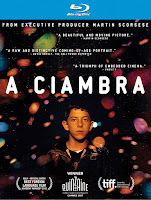 Jonas Carpignano’s second feature, set amid Roma families in southern Italy, is an arresting, quasi-documentary look at a teenage boy whose close-knit family is shaken up when dad and older brother are taken in by the police. Our young protagonist discovers that being head of the household is not as easy as it looks.

With a non-professional cast (including several members of the same family), there’s a certain roughness in parts, but the authenticity of these people and their home are delicately wrought. There’s a fine hi-def transfer; extras include a 50-minute making-of documentary; Cannes featurette; deleted scenes; and Carpignano’s original A Ciambra short. 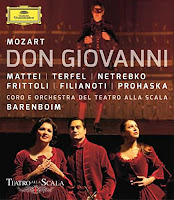 This star-studded 2011 production of the Mozart classic—with Peter Mattei as the Don, Bryn Terfel as his servant Leporello, and veterans Barbara Frittoli and Anna Netrebko and young Anna Prohaska as the women in his life—is complemented by Daniel Barenboim conducting the La Scala orchestra for three hours of operatic bliss. 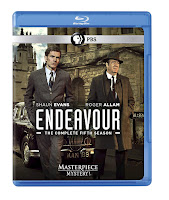 Wherein recently promoted Endeavour Morse, his worldlier partner Thursday and new recruit Fancy solve more crimes, including murder in a movie house and the theft of a valuable Fabergé egg.

The six self-contained episodes make up several hours of sheer entertainment, made most palatable by the performances of Shaun Evans, Roger Allam and newcomer Lewis Peek, all of whom enjoying good chemistry. The British countryside looks great on Blu.

Rosario Dawson is a knockout as the title character, a male fantasy of a damaged single mom: a former stripper, hooker and addict who turns grown men into putty and a young man, barely older than her son, into a reasonable facsimile of an adult.

William Macy directs Will Aldis’s threadbare script with over-insistent whimsy, which turns rom-com material into leaden melodrama; the rest of the cast—Nick Robinson, Felicity Huffman, Macy himself, Kathy Bates, and William Fichtner—has its moments but too much of Krystal is cringeworthy as it attempts being sentimental and offbeat simultaneously, like Macy’s Showtime series Shameless.

This latest release collects all 24 episodes from the penultimate 1971-72 season of the comedy-variety show hosted by Dick Rowan and Dan Martin, the perfect ringmasters for a loony stew of goofy jokes and skits, with musical interludes and political satire making appearances as well.