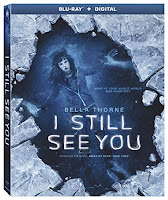 I Still See You

After a cataclysmic event that killed many, survivors still see “remnants,” the apparitions of those who died, in Scott Speer’s workmanlike adaptation of Daniel Waters’ novel.

Bella Thorne gives a forceful performance as a high school student trying to solve a murder mystery that may or may not involve her teacher (well-played by Dermot Mulroney). There’s an excellent Blu-ray transfer; extras are director Scott Speer and Thorne’s commentary, featurettes and deleted scenes (with Speer’s commentary).

In Takeshi Kitano’s latest gangster flick, a retired yakuza returns to Japan from Korean exile to slaughter seemingly everyone in his path, piling up one of the highest body counts in any “Beat” Takeshi movie.

Although his films are pretty much interchangeable at this point—and this is the last of a trilogy, following Outrage and Beyond Outrage—Kitano’s energy as director provides a car-crash quality that keeps one watching for the next ridiculously overdone bloodletting. The film has a great hi-def transfer; lone extra is a full-length making-of documentary.

In a scuzzy-looking Berlin, two criminals intent on avenging the indiscriminate murder of their family members find to their own peril that their antagonists come in the form of weapon-wielding fairy-tale villains.

Adolfo Kolmerer and William James have made a demented, sometimes enervating horror comedy that has enough outlandishly entertaining moments to be more than just the latest violent Coen-Tarantino knockoff. There’s a solid hi-def transfer.

Elizabeth I and Her Enemies

This informative British docuseries features a pair of historians, Dan Jones and Suzannah Lipscomb, who analyze Queen Elizabeth I’s life from birth—when she was apparently sexually abused by her uncle—until she assumed the throne and became the most powerful (if loneliest) queen that the world has ever seen.

Although this 90-minute portrait of comedienne Gilda Radner is a touch hagiographic—glossing over less appetizing aspects of her life story—its affection toward its subject (a beloved show biz veteran taken too soon) is contagious.

Director Lisa DaPolito interviews friends, family, colleagues (conspicuous by their absence are Dan Aykroyd and Bill Murray), contemporaries and those she influenced, and uses Gilda’s own footage, both home movies and audio recordings, to emotional effect. Extras include additional interviews and Gilda’s home movies.

The problem with tRumpworld is that nothing any satirists do—whether The Onion, Bill Maher, SNL, even the great impersonator Anthony Atamanuik—is as absurdly funny as the real thing. But this Showtime animated series (which started as skits on Colbert’s Late Show) does its level best to show how the illegitimate president and his swinish family are ruining not only the White House but the nation and the world.

But after several episodes, the humor wears thin; Colbert’s brief skits are better. The set includes all 17 episodes, along with the election special; extras include Colbert’s intro, audio commentaries, and more.

In Radu Jude’s slow-burning 1930s drama, a sickly young man enters a sanitarium and cultivates fruitful relationships inside its walls despite what’s happening in an increasingly right-wing Romania. Based on works by author M. Blecher, Jude’s film is yet another fascinating formal experiment to come out of a rejuvenated Romanian cinema, which features directors Cristian Mungiu, Cristi Puiu and Corneliu Porumboiu.

But Jude—who shot this in the 1.33:1 aspect ratio so it looks like a TV movie or something from the period in which it’s set—has a rigorous technique that keeps this minimalist drama quietly enthralling for 141 minutes.