Hirokazu Kore-eda makes intimate, insightful films about families, some dysfunctional, others not, but always shown with sympathy and subtlety. His latest is a left turn, a courtroom drama that dramatizes a showdown between a defense attorney and a client who may not be guilty of a murder he’s already confessed to.

Although the film goes too far into the weeds to keep up appearances as a standard procedural, the tense moments between the two men—including a truly stunning ending—make it all worthwhile. The film’s muted colors look really sharp on Blu; extras include a 30-minute on-set featurette. 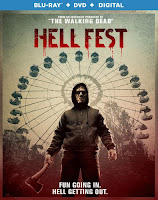 After a group of dumb teenagers traipses down to the local amusement park for a Halloween-themed party, the horror soon becomes reality as bodies start piling up in ever more grotesque—and, occasionally, admittedly inventive—ways.

If you crave yet another “let’s kill teenagers” flick, you could do worse than director Gregory Plotkin’s entry: there’s enough blood and cleverness to make its 90 minutes go by relatively quickly. One big red flag: it took six writers come up with this. The Blu-ray transfer looks splendid; lone extra is a making-of featurette.

This candid documentary portrait of Joan Jett—former Runaway, huge MTV star (briefly) in the early 80s and Rock’n’Roll Hall of Fame inductee—allows the trailblazing lady herself to speak uncensoredly and even angrily about her career in the male-dominated rock’n’roll world.

Director Kevin Kerslake has unearthed a plethora of vintage stage/backstage footage, photos and mementos, and Jett is our guide every step of the way, with her longtime manager-guru-partner Kenny Laguna. Extras include music videos and live footage.

This heavyhanded and redundant would-be comedy is set in an America where the current president wants everyone to sign a loyalty oath to him—a couple declines to do so, which leads to the ruination of the family’s Thanksgiving dinner thanks to the arrival of two Homeland Security goons.

Ike Barinholtz, who wrote, directed and stars, wears three hats too many; he even manages to make the heretofore indestructible Tiffany Haddish unfunnily wearying. This witless movie wants to be a sharp, witty satire-cum-cautionary tale, but even the converted it preaches to probably won’t find it watchable. Extras are featurettes and deleted scenes.