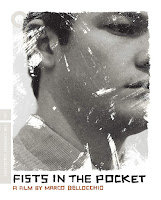 Fists in the Pocket

Marco Bellocchio’s remarkable and shocking 1965 debut is a fascinatingly repellent study of one of the most dysfunctional families ever presented onscreen. Lou Castel, who chillingly plays the epileptic son of a blind mother whom he loathes, and younger brother to an attractive sister, with whom he carries on an unconsummated, incestuous affair, leads the superb cast. Bellocchio makes the persuasive case that commitment to an ideal, even one as loathsomely anti-social as this young man has chosen, is preferable to sitting idly by.

Bellocchio has returned to that leftist theme and its endless variations of obsessive love affairs or relationships based on the abuse of power, and 50-plus years later is still Italy’s most fearless filmmaker. There’s a new hi-def transfer that makes piercingly clear the shades of gray in this B&W film; extras are 2005 interviews with Bellocchio, Castel, actress Paola Pitagora, editor Silvano Agosti, critic Tullio Kezich, and filmmaker Bernardo Bertolucci, and a new interview with scholar Stefano Albertini.

“Insane” is too mild a description of this standalone sequel to The Woman about a wild young woman taken to a priest- and nun-run home to be “civilized” after a hospital stint; but when her equally batty, knife-wielding mother shows up, all bets are off.

Director-writer Pollyanna McIntosh, who appears as Mom in this demented if tidy horror entry, has conjured a finale in church that must be seen to be (dis)believed. Lauryn Canny gives a committed performance in the title role. The hi-def transfer is fine; extras are deleted scenes and a making-of featurette.

Echo in the Canyon 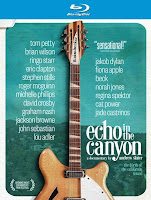 The problem is cutting back and forth between occasionally insightful interviews with Michelle Phillips, Crosby, Stills & Nash—Neil Young is quiet but plays a soaring guitar solo in the studio over the end credits—Roger McGuinn, Eric Clapton, Tom Petty and Ringo Starr and Jakob, et al, singing these touchstone tunes, limiting the scope. Either give us a concert film or a documentary. The Blu-ray’s problem—sound and video are first-rate, of course—is that there are no extras, no additional songs from the concert or additional interviews (it would have been nice to hear what else Petty—in his final recorded interview—had to say). 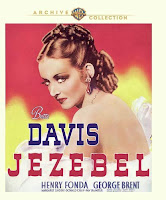 Bette Davis chews the screen spectacularly in an Oscar-winning performance that dominates William Wyler’s melodramatic 1938 gothic romance as a headstrong Southern belle who vows revenge when her beau returns with a new wife after a year away. Jimmy Stewart is fairly stolid as her man, but Wyler is more interested in Davis’ tantrums anyway; there’s also a pretty grim sequence of yellow fever striking down a southern town, circa 1852. 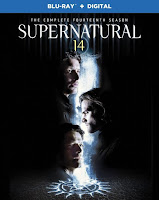 In what may be this long-running series’ craziest plot line yet, archangel Michael takes possession of Dean—who, along with his brother Sam, has been fighting supernatural beings and other monsters throughout the series’ entire run—which causes even more havoc, culminating with a vengeful God declaring the destruction of the world.

Despite the ludicrousness of the premise, there’s always been a tongue-in-cheek aspect that keeps it from completely cratering. It all look sumptuous on Blu; extras include Supernatural Homecoming: Exploring Episode 300; The Winchester Mythology: The Choices We Make; Supernatural: 2018 Comic-Con Panel; commentaries; deleted scenes; and a gag reel. 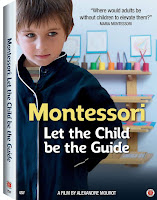 Montessori—Let the Child Be the Guide

In this beautifully photographed documentary, French father and filmmaker Alexandre Mourot—whose young daughter is enrolled in a local Montessori school—spends more than a year following children’s interactions in a Montessori classroom in order to dramatize founder Maria Montessori’s dictum, immortalized in this film’s title.

By showing these little students working and playing together without adult interference—which allows them to develop at their own pace, another Montessori motto—Mourot’s sublime film is revelatory about the world of children. 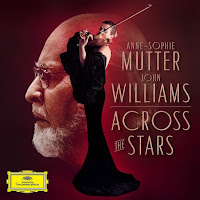 This delightful disc of several John Williams film themes—several iconic, others less familiar—is performed by superstar violinist Anne-Sophie Mutter, with Williams himself providing sensitive accompaniment leading the Recording Arts Orchestra of Los Angeles. Highlights are Mutter’s lovely renditions of “Nice to Be Around” from Cinderella Liberty (a 1973 romance with Marsha Mason and James Caan) and the theme from the 1995 remake of Sabrina (with Julia Ormond and Harrison Ford).

There are themes from Star Wars movies and Harry Potter, of course; more surprising is that only two Spielberg collaborations are here: The Adventures of Tintin (!) and Schindler’s List, whose sadly emotive theme Mutter plays with impassioned lyricism.