This boxed set collects recent Royal Shakespeare Company stagings of four Bard tragedies at Stratford-upon-Avon. Coriolanus, one of Shakespeare’s most politically relevant works, gets a decent modern-dress production by director Angus Jackson, with a stentorian Sope Dirisu in the title role. Titus Andronicus, maybe his worst play, provides a visceral jolt in Blanche McIntyre’s 2017 modern-dress production, with Hannah Morrish keeping her dignity as the unfortunate Lavinia and David Troughton making a stentorian Titus.

Julius Caesar, one of his most potent tragedies, is given a compelling staging by director Jackson, with strong acting by Andrew Woodall (Caesar), Alex Waldmann (Brutus), James Corrigan (Marc Antony) and Morrish, whose Portia more than holds her own. And Antony and Cleopatra, one of his most complex, least-produced plays, is given an accomplished staging by Iqbal Khan, with a lackadaisical Antony Byrne as Antony but a lively Josette Simon as Cleopatra. On all discs, hi-def video and audio are first-rate; extras are commentaries, interviews and a featurette. 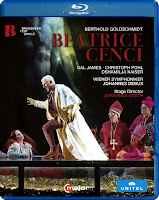 Berthold Goldschmidt (1903-96), a German-Jewish composer whose music was banned by the Nazis, has been triumphantly rediscovered, and this opera—composed in 1949-50—is a prime example of his accessible but provocative style. Goldschmidt’s splendidly paced account of a young 17th century Italian woman condemned to death with her mother for poisoning her brutally deranged father is filled with melodious and dramatic music worthy of Puccini.

Last summer’s Bergenz, Italy, staging, by director Johannes Erath, unfortunately wallows in grotesque visuals—especially egregious in close-up—that make it more like a freak show than an absorbing tragedy. Still, it’s beautifully performed by a committed cast and orchestra, and the hi-def video and audio are first-rate.

The Mad Adventures of Rabbi Jacob

Gerard Oury’s dizzying 1974 comedy was a big hit in France and abroad, but its claim to fame is that it’s so broad, so banal, and so basic in its humor—a bigot and his Arab captor disguise themselves as rabbis to elude assassins and the police—that it’s unsurprising that, watching it now, one wonders what the fuss is about.

There’s certainly much energy to it, starting out in Manhattan and moving to Paris, and the cast is enjoyable in a frenetic way, but it plays out like a misfired Mel Brooks-early Woody Allen hybrid. The film looks good in hi-def; lone extra is an interview with co-writer Daniele Thompson. 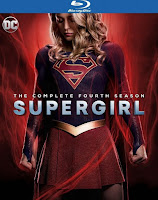 The fourth season of Supergirl explicitly mirrors what’s happening on the current political scene, as anti-alien sentiment swells in Gotham City and Kara, aka Supergirl (a charming Melissa Benoit), must attempt to win the war on two fronts: as a reporter using the press as a bulwark against fake news, and as a superhero—albeit an alien—battling the villains who have used the divisive atmosphere to make their attacks.

The season’s 22 episodes look striking on Blu-ray; extras include deleted scenes; an hour of highlights from 2018’s San Diego Comic-Con; featurettes; gag reel; and all three crossover episodes of Elseworlds. 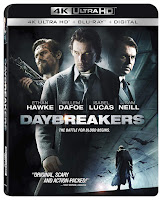 As a bloodsucker flick, 2009’s Daybreakers tries something different: in a world inhabited by vampires, humans are the outcasts. But this clever conceit can’t sustain an entire movie, which goes haywire long before its predictable ending. Juicy performances, topped by Willem Dafoe’s strangely resonant resistance fighter and Sam Neill and Ethan Hawke as very different kinds of vampires, help.

So do the diverting visuals of the Spierig brothers’ direction, which are miraculously recreated by the 4K transfer, which is simply outstanding. Extras include a comprehensive two-hour making-of documentary and a short film by the brothers, The Big Picture.

The third season—coming on the heels of last season’s insanely world-shattering developments—finds lawyer Diane Lockhart setting her sights on an even bigger criminal: Donald tRump. The series makes no bones about itching for a fight with the incompetent chief executive, and if it’s at times too didactic even for those who agree with the political sentiments, a stellar cast—led by the peerless Christine Baranski, of course, but also starring Cash Jumbo, Delroy Lindo, Audra McDonald, Michael Sheen, Gina Gershon and Jane Curtin—keeps one’s attention riveted throughout the 10 episodes.

Extras comprise a gag reel, deleted scenes, and the first episode of the series Star Trek—Discovery. 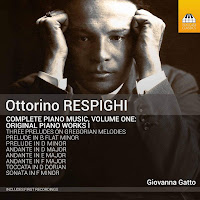 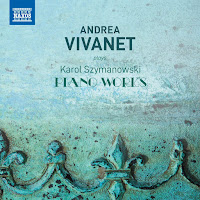 Two 20th century masters known for their voluptuous orchestral works—Italian Ottorino Respighi and Pole Karol Szymanowski—displayed their versatility and eclecticism with music in other genres, including solo piano works. Two new discs show off the composers’ rigor and craft at the keyboard, starting with Respighi’s early piano works on Toccata Classics, including a sonata and Three Preludes on Gregorian Melodies, both anything but apprentice works and played with alternating strength and restraint by Giovanna Gatto.

Szymanowski filled even his solo music with ecstatic exoticism, which his two sets of Etudes demonstrate on a new Naxos disc, along with his sublime Masques, a three-movement sonata in all but name. Andrea Vivanet displays his affinity for these formidable pieces, and one works looks forward to more volumes by both pianists.