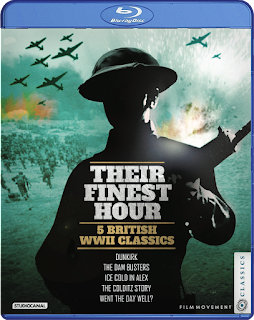 This excellent boxed set, comprising a quintet of British films set during the Second World War—Alberto Calvacanti’s memorable “what if” about a Nazi invasion of England, Went the Day Well? (1942); Guy Hamilton’s tense The Colditz Story (1955), concerning POWs trying to escape an impregnable Nazi fortress; Michael Anderson’s The Dam Busters (1955), the astonishing true story of the race to make bombs to take out crucial Nazi dams; Leslie Norman’s effective re-creation of the Allies’ retreat from the north of France, Dunkirk (1958); and J. Lee Thompson’s absorbing desert adventure, Ice Cold in Alex (1958)—is recommended for those who love old war films or simply well-made and inspiring dramas.

Not only are all five B&W features restored in superlative hi-def transfers, there’s a plethora of valuable extras on four of the discs (only Went the Day Well? has no bonues): The Colditz Story includes a documentary, Colditz Revealed; The Dam Busters includes a making-of, two documentaries about the actual men who took part, and other featurettes; Dunkirk includes newsreel footage, 1940 documentary short Young Veteran, actor Sean Barrett interview and actor John Mills’ home movies; and Ice Cold in Alex includes an excerpt from A Very British War Movie documentary, more  of Mills’ home movies, interviews with scholar Melanie Williams and actress Sylvia Syms and a featurette on director J. Lee Thompson. 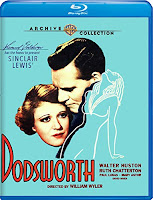 William Wyler’s 1936 adaptation of the Sinclair Lewis novel (and stage version)—concerning a long-time married American couple, Sam and Fran, who find, after their opposing responses to “sophisticated” Europe, that their relationship is deteriorating—is a mature treatment of subject matter that might have seemed too much for its day (including a brief shot of what looks like the wife’s side boob).

Walter Huston and Ruth Chatterton are splendid as Sam and Fran, Mary Astor is irresistible as Edith, the expatriate who catches Sam’s eye, and the insights into and humor about American and European cultural differences remain pertinent and potent. The film, which has undergone a recent restoration, looks terrific in rich black and white; the lone extra is a 1937 radio version of the play/novel. 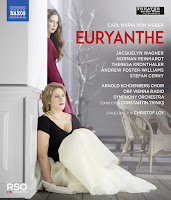 Carl Maria von Weber’s grand romantic opera suffers from a ludicrous libretto, but the contrived tale of a young woman who must prove her fidelity prior to her wedding is dominated from the start by Weber’s ravishing music.

This 2018 Vienna production, staged with passionate feeling if little clarity by Christof Loy, succeeds thanks to its leading ladies: Jacquelyn Wagner as the heroine Euryanthe and Theresa Kronthaler as the antagonist Eglantine are compelling in their acting and brilliant in their singing. Constantin Trinks leads the ORF Radio Symphony Orchestra and Arnold Schoenberg Choir with assurance. Both hi-def video and audio are splendid.

In Romanian director Corneliu Porumboiu’s latest whimsical dramedy, a shady police inspector travels to a remote island to learn a local whistling language to try nabbing criminals more crooked than he is. If there’s chutzpah in building a shaggy-dog story around such a ludicrous concept, Porumboiu runs with it, although he takes it only so far before the seams begin to show.

Luckily, the pace doesn’t lag, the film is fairly short, and there’s a fine cast, led by model turned actress Catrinel Marlon, playing a formidable femme fatale named—tongue-in-cheekly, for those who remember Rita Hayworth in the ’40s noir classic—Gilda.

Bach’s towering large-scale oratorio, about the death of Jesus Christ according to the gospel of Matthew, is one of his greatest achievements: even those who aren’t believers have felt the powerful emotional pull of this monumental music for the past three centuries.

This new recording, led by the estimable Bach conductor Masaaki Suzuki, showcases the worthy chorus and orchestra of Bach Collegium Japan, along with a strong vocal cast, led by tenor Benjamin Bruns as the Evangelist, all combining for a truly majestic performance. 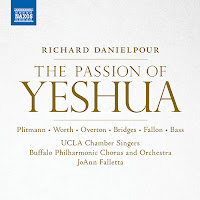 Richard Danielpour’s world-premiere oratorio of the passion and death of Jesus Christ takes its cue from Bach’s St. Matthew Passion, unsurprisingly; but whereas Bach’s work is the summit of baroque-era German music, Danielpour’s is a thoroughly modern work that alternates its sacred vocal texts between English gospel and Hebrew scripture excerpts.