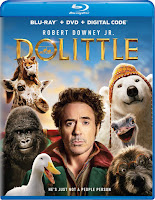 Doctor Dolittle, who could talk to the animals, has not been well-served onscreen: there was the ill-fated 1967 musical version with Rex Harrison, the enjoyable slight 1998 Eddie Murphy remake, and now this pointless reboot with a scenery-chewing Robert Downey (sporting a broad Welsh accent) as the good doctor who’s made himself a recluse after his wife dies, and the talking animals and enterprising children coax him back to life.

Director Stephen Gaughan is interested only in big set pieces, so the movie is less a coherent narrative than a series of disjointed sequences that show off the cute anthropomorphic animals, voiced by celebrities from Emma Thompson and Ralph Fiennes to Marion Cotillard and Selena Gomez. Young children might find some appeal to this harmless but ineffectual remake. The HD transfer looks stellar. 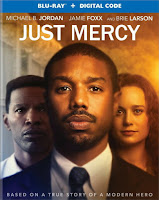 The inspiring story of a real-life hero, lawyer Bryan Stevenson, is dramatized in this compelling if overlong courtroom procedural about the lengthy but eventually successful appeal of the wrongful conviction of Walter McMillan, a black man from rural Alabama railroaded onto death row for a still unsolved murder.

Director/co-writer Destin Daniel Cretton has a fine eye for detail, and his cast—Jaime Foxx (Walter), Michael B. Jordan (Bryan), Brie Larson (Bryan’s associate) and Tim Blake Nelson (perjured prisoner), for starters—give authenticity to a triumph of justice served that serves as a cautionary tale of other instances of justice denied. The film has a fine hi-def transfer; extras comprise deleted scenes and making-of featurettes. 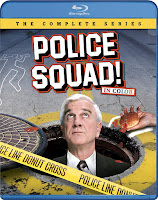 From the creators of the zany 1980 spoof Airplane!—the Zucker brothers and Jim Abrahams—comes this cult 1982 TV series (it only lasted six episodes), another spoof starring Leslie Nielsen as a doofus detective who manages to solve crimes.

Police Squad is a hit-or-miss accumulation of physical comedy, one-liners, asides, puns, in-jokes and tongue-in-cheek parody: Nielsen is game, and the opening-credit sequences are fun, but like Airplane!, your mileage may vary. It looks adequate on Blu; extras are commentaries on three episodes, archival Nielsen interview, gag reel, featurette and casting tests.

Once Were Brothers—Robbie Robertson and the Band

Director Daniel Roher engagingly recounts the eventful musical life of Robbie Robertson, leader of the Band, the great original roots-rock whose classic tunes like “The Weight,” “The Night They Drove Ol’ Dixie Down” and “Up on Cripple Creek” remain staples of rock’n’roll playlists.

Robertson candidly discusses his early life in Canada, his move to the States and finding his future bandmates, working with Bob Dylan and, later—following the Last Waltz concert film—Martin Scorsese, for whom he has scored and compiled music for several films. 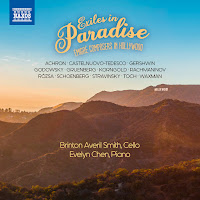 Exiles in Paradise—Émigré Composers in Hollywood

So many composers left Europe during the Nazi era for the U.S. that it was inevitable that several would settle in and around Los Angeles, where they wrote music for movies and gave Hollywood a cultural cachet it had heretofore lacked.

This sterling disc collects short works by 11 of these men—a 12th work, an arrangement of George Gershwin’s “It Ain’t Necessarily So,” is by violinist Jascha Heifitz, another émigré—including the familiar (Stravinsky, Schoenberg, Rachmaninoff), the obscure (Godowsky, Achron, Gruenberg) and those best-known for their film scores (Korngold, Waxman, Rosza). These beguiling miniatures are attractively performed by cellist Brinton Averil Smith and pianist Evelyn Chen. 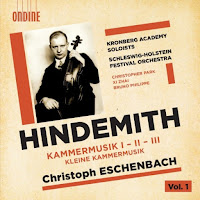 Early in his career, German composer Paul Hindemith (1895-1963) wrote several concertos for soloists and orchestra under the rubric Kammermusiken. The four concertos collected on this superb recording, composed between 1921 and 1925, showcase Hindemith’s talent for balancing the virtuosic demands of the soloist parts and the orchestral underpinnings, notably on Kammermusik No. 1 & 2 (pianists) and No. 3 (cellist).