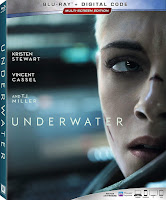 In director William Eubank’s efficient if wholly derivative thriller, shaven-headed Kristen Stewart leads a group of people working at the bottom of the ocean for an oil company who fatally discover several heretofore undiscovered (and lethal) creatures. Most of the dramatic beats are lifted directly from the original Alien, but Eubank and his writers aren’t bothered enough to disguise them, which mitigates their effectiveness. A more serious problem is the difficulty differentiating among people in underwater suits, so there’s not much at stake except to watch who goes next. The hi-def transfer looks warm and inviting. 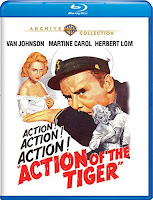 Action of the Tiger

The title comes from as lofty a perch as Shakespeare’s Henry V, which is far too exalted for such a routine 1957 adventure, directed in a rather desultory manner by Terence Young (who would helm the first Bond film, Dr. No, five years later, with an actor who has a small role here, Sean Connery). As a mercenary boat captain, Van Johnson has an abrasive manner that’s a mismatch for French actress Martine Carol in one of her few English language roles; their romantic scenes together are faintly ludicrous. With splendid locations in Greece and Spain, the film has a ravishing color palette that looks great on Blu. 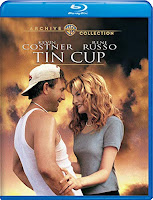 This 1996 reunion of Bull Durham writer/director Ron Shelton and star Kevin Costner is an enjoyably breezy if overlong tale of another brash and veteran underdog, a golf club pro who enters the U.S. Open to win the hand of the current squeeze of a vain and obnoxious pro. Costner is always charming and Don Johnson makes a good foil, but I’ve never had much use for Rene Russo, even though she tries hard and has some good moments. The problem is that, at two-plus hours, this drags itself to the 18th hole; shorn of 20 minutes, Tin Cup would have been a hole in one instead of a mere birdie. There’s a terrific hi-def transfer. 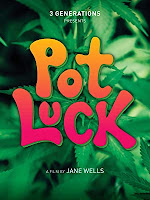 Just in time for 4/20, Jane Wells’ documentary (engagingly narrated by Robin Quivers) engages with all sides of the current cannabis debate in Colorado, which legalized it in 2012: those who sell, grow, use, are against, and must deal with the consequences of it. Wells’ interview subjects range from the thoughtful to the humorous to the banal, but since the film is only 75 minutes, it seems too thin and superficial to gain any lasting insights from. Still, it is an intriguing peek at what’s going on in ground zero for legalized weed.

Slick Woods gives a magnetic performance as a Bronx teen fancying herself a future dance star in hip-hop videos who must deal with current reality when she has to make sure her younger sisters aren’t taken away to foster care after their mom is arrested. Too bad Sam de Jong’s mainly routine drama only has infrequent flashes of insight and local color to compensate. The lone extra is U.K. director Dionne Edwards’ short film, We Love Moses. 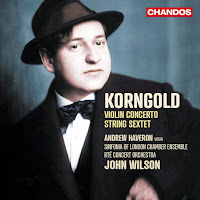 Erich Wolfgang Korngold composed some of the greatest and grandest film scores of the ’30s and ’40s (A Midsummer Night’s Dream, The Adventures of Robin Hood, The Sea Hawk), and his only violin concerto often sounds like the very best film music, especially as played by soloist Andrew Haveron—whose fluid tone perfectly mirrors Korngold’s melodic genius—and accompanied by the RTE Concert Orchestra under the stable hand of conductor John Wilson. Korngold’s string sextet, one of his towering chamber pieces, also has a symphonic grandeur that the superior Sinfonia of London Chamber Ensemble on this disc captures beautifully.