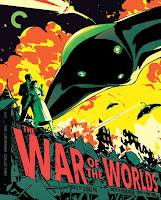 The War of the Worlds

Director Byron Haskin and producer George Pal’s 1953 adaptation of H.G. Wells’ classic 1897 sci-fi novel about a Martian invasion remains watchable even if it is cheesy and dated-looking: although, it must be admitted, for its time, the special effects are fairly dazzling. 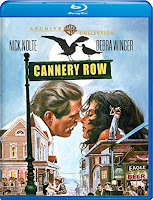 John Steinbeck’s most famous novels were successfully turned into films (The Grapes of Wrath, Of Mice and Men, East of Eden), but David S. Ward’s 1982 adaptation combines Steinbeck’s Cannery Row and its sequel Sweet Thursday to lesser effect.

Sven Nykvist’s gorgeous photography, Richard MacDonald’s stunning set design and John Huston’s craggy narration outpace the budding romance of Doc and Suzy, outsiders on Cannery Row. Despite the presence of Nick Nolte and (especially) Debra Winger, this overwhelming exercise in style—like fellow early ’80s flops One from the Heart and Popeye—is worth a watch as mainly eye-popping sketches for a story that hasn’t been supplied. The hi-def transfer is, unsurprisingly, transfixing to watch.

Romance on the High Seas 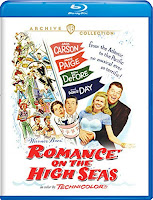 In this diverting 1948 romantic comedy set primarily on a cruise ship, a suspicious wife and husband hire a stand-in and a private eye, who promptly fall for each other, which leads to a satisfyingly silly finale of mistaken identities.

The two couples— Janis Paige (wife) and Don DeFore (husband), and Doris Day (in her effervescent movie debut as the stand-in) and Jack Carson (private eye)—are enjoyable enough to make this dated comedy a treat, along with Jule Styne’s songs; the bursting colors of director Michael Curtiz’s production—shown to great advantage on Blu-ray—also keep things percolating.

In his latest documentary about how humans deal with their environment, director Nikolaus Geyrhalter provides eye-opening views of some of the most imposing terrain on the planet—mines, quarries and tunnels—to show how we are forever altering the planet, even more so, unbelievably, than natural forces.

Juxtaposing God’s-eye views of places in California, Austria, Hungary, Germany, Italy, Spain and Canada (which look like otherworldly abstract paintings) with trenchant interviews with those working at these sites, Earth displays the simultaneous beauty and horribleness that accompanies the changes that can irrevocably damage our one and only home.

This look at a truly great man might be somewhat hagiographic, but when the subject has done as much over the past six decades for civil rights and race relations as John Lewis has as a congressman from Georgia and as an associate of Martin Luther King—marching at Selma, speaking at the march on Washington, for starters, trying to end racism and prevent the loss of our democracy—then there’s nothing to criticize.

Lewis is still going strong at age 80, and Dawn Porter’s lovely portrait presents a humble but dedicated hero for so many still in pursuit of liberty and justice for all.

A product of rock’n’roll haven Detroit, Suzi Quatro was a tiny woman with a big voice, a big bass and a big personality, all of which gave her a successful career outside of America, where she had a couple of mid/late ‘70s hits (“48 Crash,” the duet “Stumblin’ In” with Chris Norman) and a recurring role on TV’s Happy Days as Leather Toscadero.

Liam Firmager and Tait Brady’s documentary tells Quatro’s story from her teen days in a band with her sisters to current icon status. Quatro is still an unapologetic spitfire and others heard from in this well-rounded portrait are her sisters, brother, ex-manager, ex-producer/songwriter, ex-guitarist/ex-husband and superfans like Cherie Currie, Tina Weymouth and fellow Detroit native Alice Cooper.

This intriguingly twisty crime procedural pairs a forensic psychiatrist (skeptical of anything unscientific) with a Catholic seminarian and his assistant to search for (or rule out) supernatural answers to murders and other crimes.

It’s too bad that the series often takes the easy way out with cheap attempts at scares—like the pilot episode’s unintentionally funny night terrors subplot—because when concentrating on the psychology of supernatural vs. reality, it’s compelling. Katja Herbers, an effortlessly winning actress, could be Carey Mulligan’s doppelgänger (that would make a great episode), while Mike Colter, Aasif Mandvi and Christine Lahti provide excellent support. In addition to the series’ 13 episodes, extras include featurettes and deleted scenes. 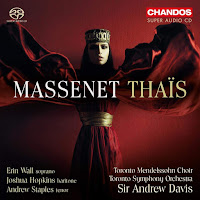 Massenet’s “exotic” opera, about an Egyptian courtesan whose true purity is revealed, but with tragic consequences, is best known for its lilting Méditation, an intermezzo for violin—which, in this recording, is dispatched beautifully by the Toronto Symphony Orchestra’s concertmaster, Jonathan Crow.