VOD/Virtual Cinema Release of the Week 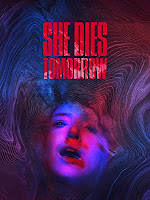 Writer-director Amy Seimetz’s all-too-relevant horror film takes something from the everyday—a young woman believes she’s going to die within 24 hours, and her anxiety is contagious, as others are affected by her “virus”—and makes its concerns of existential, physical and mental dread caused by Covid-19 universal.

While not entirely successful (there are too many dead-end sequences or visual non-sequiturs), Seimetz’ film has hit on a powerfully metaphorical story, and her committed cast (Chris Messina, Josh Lucas, Jane Adams, and as the director’s alter ego—one assumes since the lead is named Amy—Kate Lyn Sheil) plays it to the hilt. 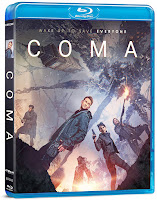 Russian director Nikita Argunov’s imaginative dystopian fantasy owes more than a little bit to Inception, especially in its visualization of a fragmented and jumbled world based on dreams, called “Coma.” But Argunov’s story of an architect who awakes after a bad accident and joins a rebel group of fighters to rediscover reality is cleverly done and has matchless special effects.

The film (which can be watched in either the original Russian with subtitles or in an English dubbed version) looks vividly hyperrealistic on Blu; extras are several short featurettes. 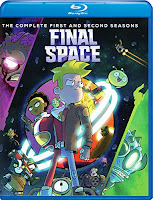 Creator (and lead character voice) Olan Rogers’ animated sci-fi series makes for an unwieldy if witty and cock-eyed parody-cum-satire that works handily at times and falls flat at others. Both seasons—25 episodes in all—are pointing toward increasingly meager comic returns but the refreshing low-fi animation and an impeccable voice cast (Keith David, Fred Armisen, Conan O’Brien, for starters) make it watchable.

While the unevenness is closing in, enough originality remains on display to get a green-light for a third season. Hi-def video and audio are first-rate; extras are short featurettes on each episode. 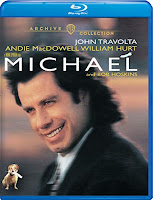 Nora Ephron’s 1996 fable is lumbering and crude; I hoped a second viewing 24 years later would improve it, but unfortunately it remains probably Ephron’s worst film: that it took four writers to cobble this piece of leaden whimsy together was an obvious sign of trouble.

A game cast—William Hurt, Jean Stapleton, Andie McDowell, Bob Hoskins and John Travolta as the fallen angel—never transcends the trite material, and at times Ephron’s visuals are remindful of Steven Spielberg at his most trite and syrupy. The film looks fine in hi-def.

This 1995 period piece is among Chinese master Zhang Yimou’s weakest efforts, a slow-moving and predictable gangster tale seen through the eyes of a boy who improbably becomes an assistant to a local henchman’s kept woman, a gorgeous courtesan who is also a popular nightclub singer-performer.

Despite the glamorous presence of Zhang’s then-muse, Gong Li—who gives a shockingly unsubtle and flat performance—and mesmerizing Oscar-nominated cinematography by Lü Yue, this strident drama vaporizes from memory as soon as it ends. The film does look superb in a new hi-def restoration; lone extra is a video essay about the film by scholar John Berra.

DVD Releases of the Week

The Destruction of Memory

This eye-opening 2016 documentary by director Tim Slade vividly shows how the wanton destruction of many sites of cultural and artistic heritage during wartime and beyond—from World War II and Bosnia to September 11 and Iraq—is something that’s within our power to stop if there is far-reaching buy-in and if we use modern technology to mitigate the potential losses.

As defined by the 1954 Hague Convention, genocide is usually considered against large groups of people, but the annihilation of libraries, museums and religious sites (as often as not today by non-state actors) demonstrate an ongoing attempt at erasing our very history. Intelligent talking heads and shocking footage of widespread damage provide a needed immediacy to this important subject.

One of the most successful franchises ever on network television, the NCIS umbrella now encompasses three series—the original, set in Washington D.C.; the first spinoff, in Los Angeles; and the most recent, in New Orleans—each of which smartly uses its locale for its rigorous investigators to solve their cases. 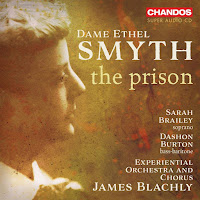 Although Dame Ethel Smyth (1858-1944) is now considered a major composer, she didn’t receive recognition from her contemporaries until late in her long career. A prime example of her mature works is this, her last major composition, written when she was 72. The bleakness of the subject matter notwithstanding, this is an ennobling and even thrilling symphony that, with its extensive parts for soprano, bass-baritone and chorus, is an oratorio or even one-act opera in all but name.

This exemplary recording features bass-baritone Dashon Burton as the Prisoner, soprano Sarah Bailey as His Soul and the Experiential Chorus, along with the Experiential Orchestra, all under the baton of conductor James Blachly.