Con artists, femme fatales, Russians and Western gunslingers – mixing together better than peanut butter and jelly. Right? Well, find out for yourself!  In the coming weeks, two of the season’s most significant film books will be celebrated by Museum of the Moving Image with two author events featuring film screenings, discussions, and book signings. 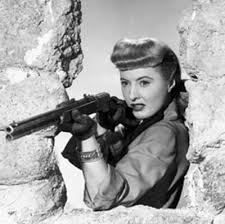 On Sunday, February 19, film scholar Dan Callahan, author of Barbara Stanwyck: The Miracle Woman, will explore the life and art of the great Hollywood star with a double-feature screening of two of Stanwyck’s most acclaimed movies. In The Lady Eve, Stanwyck is a con-artist who seduces a naïve snake collector on a ship. According to Callahan, this is “Stanwyck’s funniest, most confident, and most unabashedly romantic performance.”  Forty Guns, director Samuel Fuller’s cracked Arizona gunslinger epic, pits a new pacifist marshal (Barry Sullivan) and his brothers against the oppressive rancher Jessica Drummond (Stanwyck) and her posse of 40 hired guns for control of the county. Naturally, the marshall and Jessica fall head over heels in love, much to the chagrin and confusion of the good and bad guys. Easily one of the wildest and most grandly weird westerns in cinema history. Screenings will be followed by discussions and book signings by Callahan.

On Sunday, March 11, celebrated novelist and New York Times columnist Geoff Dyerwill participate in a conversation about his obsession with the Russian director Andrei Tarkovsky, a subject at the core of his discursive and fascinating new book Zona. This dialogue with Dyer, moderated by the Museum’s Chief Curator David Schwartz, will be followed by a book signing and a screening of The Mirror, Tarkovsky’s stream-of-consciousness autobiographical film set in World War II-ravaged Russia, cited as the inspiration for Terrence Malick’s Academy Award-nominated film, The Tree of Life. A book signing will follow the screening.

All screenings and discussions are free with Museum admission. Book signings will take place in the Museum store.

Geoff Dyer on Tarkovsky, Cinema, and Life, with screening of The Mirror
March 11, 2012

For Media inquiries, contact:
Tomoko Kawamoto
This email address is being protected from spambots. You need JavaScript enabled to view it. k
718 777 6830