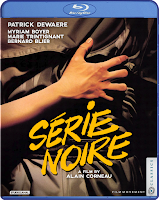 In Alain Corneau’s provocative 1979 study of lowlifes and delinquents based on Jim Thompson’s novel A Hell of a Woman, Patrick Dewaere—who killed himself six years later at age 35—projects sheer desperation better than anyone this side of Klaus Kinski.

Next to Dewaere’s memorably sketchy turn as a small-town salesman are finely etched performances by Myriam Boyer as his mousy wife and 16-year-old Marie Trintignant (also lost early when she was beaten to death by her boyfriend at age 40) in an astonishing debut as a troubled teen who gets involved with him. Seire Noire remains the second-best Thompson adaptation, runner-up to Bertrand Tavernier’s searing 1982 Coup de Torchon. The film’s grit is well-served on the grainy Blu; extras include 2002 interviews with Trintignant and Corneau and a recent retrospective making-of documentary. 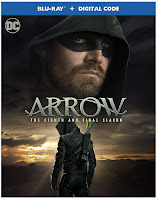 Eight seasons of Arrow are wrapped up in satisfying fashion as Oliver Queen (aka the Green Arrow) turns from protecting his beloved hometown Star City to being the last bulwark of safety for the entire multiverse—with several surprising (and even touching) outcomes as the 10 episodes move back and forth thousands of years in the past and into the future.

The uniformly appealing cast is led by Stephen Amell’s Oliver and Emily Bett Rickards, Melanie Merkosky, Katherine McNamara and Katie Cassidy as several of the women revolving around him. The hi-def transfer looks excellent.

Fist of Fear, Touch of Death 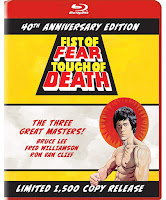 But, despite the presence of Blaxploitation vets Fred Williamson and Ron van Clief—and the always interesting Adolph Caesar as our ringmaster of sorts—this never becomes anything other than a curio for desperate Lee fans. There’s a nice, grainy Blu-ray transfer; the lone extra is a retrospective featurette including interviews with Mallinson, Williamson and producer Terry Levene. 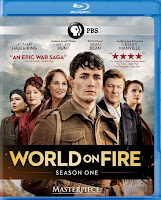 This absorbing seven-episode historical miniseries thrusts viewers headlong into the beginning of the Second World War on a large canvas that includes Germany, Poland, France, England and Belgium.

The title means “Remember?” in Italian, and director Valerio Mieli examines how memory (and, as Milan Kundera has it in his great novel, forgetting) informs a young couple at the center of his messy but intriguing romantic drama.

The performances of the delightful Linda Caridi and brooding Luca Marinelli are the heart of a film that dives into the complexities of how each partner sees the relationship, no matter how contradictory or maddening it may be to the other one.

Newcomer Romina Bentancur never hits a false note in her portrayal of a smart and headstrong girl dealing with friends and family—and some of best moments occur as Garibaldi observes Rosina’s sister, who has own teen-related difficulties. 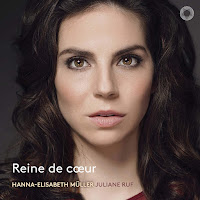 The shimmering German soprano Hanna-Elisabeth Müller has fashioned a lovely recital out of the great practitioners of German lieder and French melodies—Schumann, Poulenc and Zemlinsky—in a program of love, life and the depths of the soul.

Müller’s clear soprano rings out with authority and aching honesty, and she is sensitively accompanied by the excellent pianist Juliane Ruf. The Poulenc songs, particularly—two sets of his most beguiling works—are the highlights of a superlative recording.